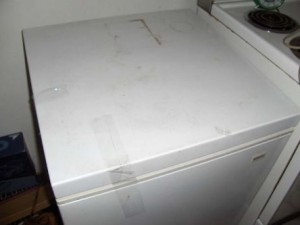 I have to clean this today.

There’s… stuff… in there. Dead stuff. Somewhere, somehow in the now distant past of last spring (maybe…?) my freezer got shut off. I didn’t figure it out until I decided to move it from what is now The Schoolroom into the laundry room.

As we were moving it, the lid was accidentally flipped up and Kyla dissolved into a puddle on the floor as the result of breathing the noxious gas that enveloped her head.

We’ve been talking about cleaning it out. Talking.

If a friend comes over, she and Ky talk about conniving someone into driving it far far away (covered in many many layers of duct tape, of course, as a courteous warning to anybody that may stumble across it), and dropping it in the bush, or a field. Artsy a thing as that would be to do, I had to put the kibosh on it.

I also had to nix the idea of “dropping it off” at a used appliance store for disposal, which prompted a discussion on why you just don’t unload your rotten food on unsuspecting people because you’re afraid to open the freezer. You just don’t.

Which means, I gotta clean the thing. Today.

I have a game plan involving moving the thing out to the balcony and pouring vinegar into it to diffuse the situation. I’m going to leave the lid open and come inside for an hour or so, perhaps taking small home-videos of the birds falling out of sky to land on the roof. At least we won’t starve…

If I can stand to be out there with the thing after that, I shall don industrial strength rubber gloves and move the… stuff… into a trash bag.

I think I may have to get drunk tonight.

So, I figure it’s safe to go out, and I go out armed and armoured. Trash bags, rubber gloves, metal garbage pail circa 1957 that has survived lobsters, trash can fires, and 50 years of various other kitchen mishaps. I inherited this pail early, at my insistence. Life without it would not be worth living. It’s sort of like the relationship a hitchhiker has with his towel.

When I get out there, I decide I can survive the stench. I also discover this: 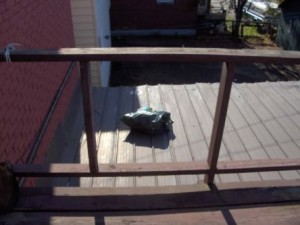 Some JERK threw his trash up onto my ROOF!

I am not impressed, to say the least as I have to sacrifice a trash bag to bag HIS crap that split the bag open when it hit the roof.

Mother Nature and Planet Earth be damned. Those things are now sandwiched into several layers of green garbage bags, shopping bags, and some JERK-with-a-Great-Throwing-Arm’s garbage.

I think I can handle it from here, now. I just have to bail it out and scrub it. Then I’ll pray a little bit.

Then I’ll get drunk.

Random Song-for-the-Day: “Wake Me Up When September Ends” – Green Day

Les, you’re so brave! I think I’d have been inclined to start drinking heavily before diving into that job. I hope you survive scouring the Cube of Doom. Icky!

Oh, you don’t know the half of it, Suzi! I figured after filling it with anti-bacterial floor-cleaner (again, Mother Nature, be damned!) and hot water and bailing it out (twice!), then spraying it down with some kind of no-scrub foam cleanser stuff (oh, I’m going to the special “Environmentalist Hell”, now, I tell ya!) that I could just wipe it out when we got back from dinner out.

It’s dark out there.

That’s how I feel about my freezer. And my closets. And pretty much my whole house most of the time!

Several years ago there was an incident where I had to help my friend clean out her fridge after the power had been cut to it for a couple months. It was one of the scarier moments of our lives and I’m not sure how much bleach we inhaled scrubbing out the new lifeforms in there. You have my sympathies!

I’m sure you are all grateful that I didn’t video the whole procedure and make a short out of it…. ;-D