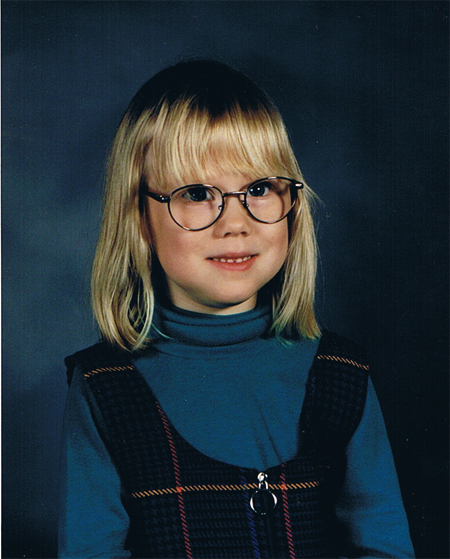 No, really, let’s compare, shall we? If only to piss off my daughter – who tells me she’ll kill me if I post this, but then laughs out loud when she looks at this photo of herself, so I think I’m all good… Tell me that’s not eerie…

My mother was absolutely mortified when this happened, but laughs herself silly every time she tells it, now. I have a pretty good idea, though, that it was many, many, and more many years after it happened before she could even begin to eke out a snicker when she thought of it.

She was at a very sensitive time in life, then – only a little older than Ky is now, a young teenager, and it doesn’t take much to mortify a teen-aged girl (just ask Ky’s mother – who will grin an evil grin, because I’m, well, evil.).

This would probably have been just before WWII… or just after it began… and my mother was, for the very first time, being “seen home” by a young man. It wasn’t my father (to which revelation I always gasp loudly when Mom gets to this point, just because it’s funny to hear my School-Marm mother say, “Hey, I’ve been around, you know!”), but another young man in the village.

My mom was a looker, and apparently, several young men were sweet on her back then. By her own admission, however (and my father’s absolute insistence, as well, I might add), it was Dad that my mother was really only ever “sweet on”. Maybe she was trying to make him jealous, although she says not.

In the end, though, she got him, didn’t she? I’m still trying to get that story out of her, but so far, she won’t say how. Nor would he, dammit.

So, back to the subject, my mother was seen home by some young fella whose name I can’t remember and I don’t suppose it matters much now, but on with it, already. Mother invited him into the front room, probably because that’s where the rest of her family wasn’t, and it was fairly late. Blanche, at least, had already gone to bed… which was the reason the mortifying-ness was imminent to begin with.

Had my mother known what was coming, I’m sure she’d have forced the young man to woo her on the back step in the freezing cold, rather than go through the next fifteen minutes of hell… He might have rather frozen, as well, considering how… ummm… awkward those fifteen minutes must have been for him.

It was winter, and, rather than bank the fire in the front room wood stove, Grampa had thoughtfully added a few more chunks of wood on so that my mother and her “fella” would be comfortable. The rest of the family, those awake, anyhow, were pointedly absent of the room, most likely parked in the kitchen near the big old cook stove.

They tried to make small talk: How’s the cattle? Got your hay in okay last fall? Hope it thaws in time to get the potatoes in…

And then, above their heads, came a sound.

Startled, the young man looked up. My mother giggled a little and told him that the girls’ bedroom was overhead, and that it sounded as if Blanche had gone to bed… The young man settled down again, and the small talk continued…

And then there was more noise from overhead: the bed springs again, followed by the sound of a pair of feet hitting the floor above. Hard.

There was only one thing she could think of that would cause Blanche to get up out of bed at that late hour. She prayed she was wrong… because it was winter, and cold outside, and if my mother was right about the why Blanche was getting out of bed, it followed that Blanche was about to ensure that both Mom and her suitor were about to experience the longest, most awkward moment they had ever experienced.

There was a cough from overhead, and the bedsprings let go in a manner that told them Blanche was most definitely out of bed, now… a couple of footsteps… followed by the unmistakable sound of a tin chamber pot being dragged out from under the bed, across the bare floorboards.

Mom cringed, and imagined her young man was probably doing the same. She didn’t dare look at him.

And then it came. That sound.

Every time I hear this story, I picture Mike Meyers as Austin Powers, just after he was unfrozen in the cryogenic lab… Except, of course, Blanche didn’t pause. She just went on… and on… and on….

After it was all over and done with, the chamber pot was slid back under the bed, the bedsprings sprung one more time, and my mother was ensured completely of never being seen home by this particular young man again.

They were quiet for awhile, neither wanting to speak first. What to say after that, after all? Finally, though, the young gentleman spoke.

“Well. I imagine she feels a lot better, now…”

Now, that would have caused me to laugh, and all would have been well… but my mother died a little inside at that comment. She says that every time she saw that particular fella again after that night, all she could think of was the sound of that chamber pot being pulled out from under the bed.

It’s really too bad that Mom had to live through that uncomfortable little space of time, but in the long run, I’m very grateful she did. Otherwise, she may very well have gone on to a second date with that young fella, and married him, rather than my father.

And 67 or so years later, I would be hard put to come up with a blog post for today.

3 replies on “The Chamber Pot”

LOLOL! Great story! I was making my own Austin Powers reference even before I got to yours. It’s a theme around here. Both of those photos are adorable, and they certainly do look like they’re related!

Les Says: I swear, Ky looked like she could have been Blanche’s twin sister when she (Ky) was really little…

The resemblance is definitely there.

I’m embarrassed to admit I thought the springs were going to start squeaking in a, uh, how you say, rhythm. If you know what I mean.

The Waitress – Part I is HERE.

So funny, made more so by the fact that I’ve used those before! Only, down south, they were more commonly known as “slop jars”! Sure beat the cold, dark, path to the outhouse though!

Les Says: Agreed… and WHY are outhouses, always down at the bottom of a slippery downhill path?!

I HATED chamber pots – in the case of my chamber pot history, though, it was always a plastic pail – and would sneak out of the house and just creep around the corner rather than use one.