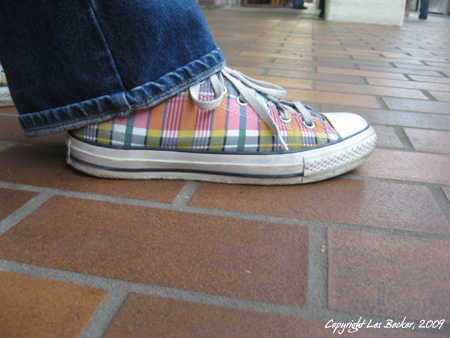 I know this post is so late that it’s near unforgivable. Here I am at last, though, having killed Photoshop and reanimated it so that I can use it again.

Our Detroit trip shrunk a little… thankfully. My sad attempt at “pre-planning” failed miserably enough that we ran out of time to get all the way to Detroit and back in the few days left of my RTO, so I was ecstatic when Cardiogirl emailed me with, “How about meeting half-way, Betch?!”

She and Mr. C. had decided that an overnight with their three girls as far as Grayling would be a nice little surprise for the family. Imagine being 8, loaded into the car to go to McDonald’s for supper, and ending up miles away in a strange hotel, face-to-face with a couple of whacked-out Canuckians. Surprise!

Ky and I decided we’d go a day early and stay over in Gaylord, simply to experience a certain Chinese restaurant we’d heard nice things about. That stay was worth it, just for the meal, which the hotel paid for. They also gave us our breakfast, a fabulous pool and mittsful of free DVDs to watch. I think we may have fallen asleep in the middle of Movie #4…

Check in was for 3 pm, and we were early, so we decided to drive around town. I happened to park directly in front of Ky’s idea of Heaven: 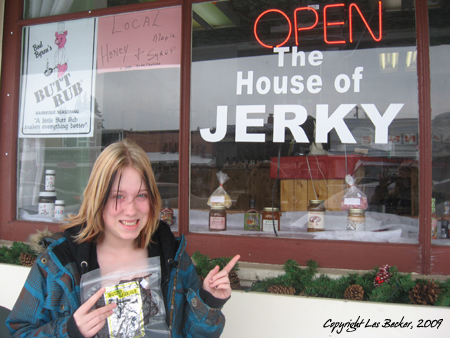 Heaven: A Whole Store Dedicated to Jerky
Taken March 21, 2009 with Canon PowerShot A550

We got back to the hotel at around 1:30, where they let us check in early, and we wandered the most kid-friendly place I’ve been in. Ky started to get nervous over meeting CG’s three girls.

Ky loves kids, but as she says, “You never know if they’re going to be annoying, and what if they are?”

My nerves were shot, too. What if, even after all the blog-comments, and emails, and phone-calls, it turns out that I meet my best Shetbag face-to-face and… we have nothing to say?

What if her husband, whom I really know nothing about turns out to be an arse?

What if her kids are all run-amoks and she just lets ’em go until I want to stomp on them?

What if everybody at work is right, and these people turn out to be mass-murderers who troll the internet as a hobby, looking for stupid Canadian people (like us, for example) to entice into the States, and then they chloroform us and we wake up in the dark somewhere, drugged out, packed in ice, and missing important organs? I mean, they are from Detroit…

In CardioGirl’s post about the trip, she mentions her own misgivings, but she was a little more succinct. “What if she’s lame?” I guess maybe that’s what my own concerns boiled down to, but Canadians do tend to wax eloquent, eh?

After pestering the poor Front-Desk Man over and over, he promised he would have CG call us upon their arrival, so we went back to our room and waited.

And then the phone rang and I climbed up onto the ceiling and clung there, afraid to go meet them. Ky managed to peel me off, dress me up a little, and we went to the pool area, to find CardioGirl, et al, waving and grinning and yes, I even got a hug from the non-hugging Betch, can you believe that?!

And her first words after “Hi!” were: “Say ‘Apple’.” Apparently, the Canuckian accent is funny as hell. And when “Eh?” slips your lips, an American will laugh really hard. Every time.

We spent a most wonderful less-than-24-hours, half-naked in a hot-tub drinking beer (yes, that would be my favourite part), watching Ky have way too much fun with the most well-behaved, articulate, cute, non-fighting little girls I have ever met; shared two meals, and generally got pruney soaking in chlorine.

And that pic up top is the only usable photo I managed in our entire visit.

We are going again.

And this time, we’ll make it to Detroit.