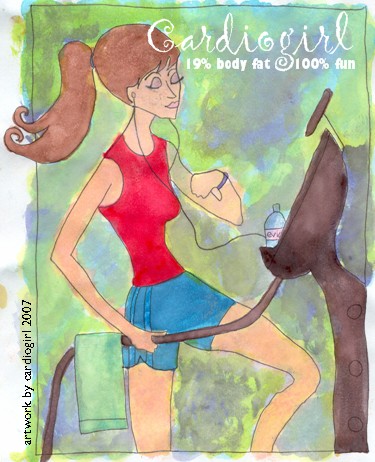 This Image Stolen Fair and Square from CardioGirl

I got tapped to be Guest Goddess Question-Answerer and Comment-Wrangler over at CardioGirl’s place for today.

EDIT: As CardioGirl has killed her damned blog (Betch), clicking the above link will take you to an internal page on this blog (unkilled). Yes. I stole her comments. They were too funny not to.

Shetbag has a new thang going on over there. I got to go first, which is cool, ‘cuz I really, really, really like to be first at all times.

The New Thang works thusly… CG makes her readers do all the work when she gets lazy. I guess I shouldn’t say that – I thought it was a really cool idea (and she even gave me credit for it, although I don’t really remember coming up with it), and I do like to be referred to as Royalty – mainly because of that “I was stolen from Royalty and later found in a ditch by my adoptive family” fantasy that many kids have.

In my case, it’s true, though. Un-Brother Ken will corroborate the “ditch” part of the story – the rest I had to figure out on my own.

Today, I get “Goddess”, which is even that much better than “Royalty”. Now, I can tell people I was stolen from… ummm… Heaven. Yeah.

ANYway… CG saved my butt – I have no post today, on account of I need a snake picture. Anybody wanna ante up on that? I’ll give you appropriate credit of course.

Snakes. Lots of ’em. In one shot. Please.

Y’all know how much I love Kelly of the Shoes. Well, when I heard she had a cameo in the new Weezer video (along with Chris Crocker, if you can believe it), I had to go check it out, of course.

Not-So-Random Song for the Day: “Pork and Beans” – Weezer