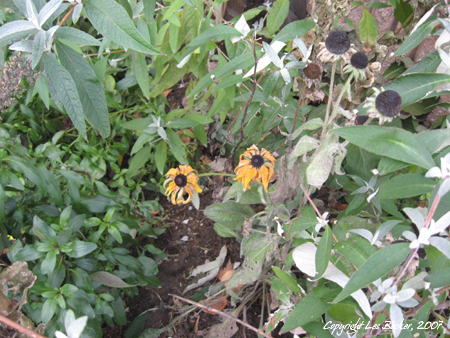 Apparently, I am becoming a bi-weekly (or is it “monthly”?) blogger. Much of the steps to this new life I’m building have had to take place off-line (I’m driving! I’m driving!), and by the time I get back in the house and get comfortable again, the evening has disappeared.

Another thing keeping me off the blog has been that my kid seems to have lost her magic powers. Yes, the TV has finally given up the ghost completely. Fabulous sound. No picture whatsoever, not even the squishy, short people we were sometimes getting. No TV does not make for a happy teenager.

I went out to visit Louie and bought a new TV; whereupon the model purchased promptly went on back-order. As Louie very generously offered free delivery (not to mention, free haul-away of the gargantuan dinosaur that just died), I didn’t mind the wait of a week.

Ky spent the week watching DVDs on my computer. Now that I’ve given the laptop over to her for her exclusive use, it’s just not good enough anymore, so she steals mine out from under me. I figured I could deal with it… what’s a week?

Well, a week in Louie’s world is about two and a half weeks in mine. It’s difficult to arrange delivery and dinosaur-hauling from an exotic island somewhere in the South Pacific, apparently. Yes, the bastard went on vacation, and during his layabouts on the beach, drink in hand, kids in the ocean, my kid somehow forgot television ever existed, having googled free full episodes of her favourite anime show (with my computer), and watching DVDs (with my computer), and doing homework (with my computer), for yet another week, and then of course it hit me square in the forehead. I could have better spent that thousand dollars on a new computer for her and cancelled the cable subscription. I may yet do that. The TV has not been delivered, after all.

In other news, The Fear of Driving was imaginary. How cool is that?! I have come to the “in-car” portion of my Driver’s Education course, and my instructor finds it difficult to believe I haven’t driven a vehicle in over 15 years. The only thing he feels needs improvement so far, is my left-turn technique – although he is impressed with my ability to avoid the inevitable-looking head-on collision with on-coming traffic that my technique seems to employ. Apparently, as opposed to the “average” driver, I do not make my turns too wide… but avoid my lane altogether and choose the other guy’s. His way of training me out of this is to slap me. I’m serious – I’ve been slapped about 30 times now. I told him I will only turn right from now on.

Other than the slapping part, I’m loving the driving. I can’t wait to buy the truck and terrorize the States (look out Suzi…)!

There is much more to say. Unfortunately, time has got away from me yet again, and I’ll have to hold off with the news, the plans, the Ruby stories, hospital/Dad disappearing acts, and my excuses for the failure of my first foray into NaNoWriMo, at least until the TV gets here.

Random Song for the Day: “The Infanta” – The Decemberists

Hi Les. You’d be right at home here in New Mexico. Many, many of our drivers have trouble with left turns. (Do you suppose they’re all right handed?)
Re the broken TV. I can remember much the same problem years ago. I think we were without the one eyed monster for well over a month. It was amazing. The kids found other, better things to do.

Les Says: Oooh, Catmoves… you may come to wish you hadn’t divulged your whereabouts – New Mexico has been on my “list” for some time now. 😉

And I’m seriously considering trading the as-of-yet-undelivered new television for another computer, now that the kid seems to have traded one idiot-box for another.

Oh, Les, I’m there with you on the NaNoWriMo failure. Oh well, there’s always next year, right?

Les Says: That’s right – we’ll win it next year… but I think I’m only going to get my license if I promise to cross the International Bridge into the States with it. Toward you. Hmmmm…. coffee? LOL!

Shape up kid! I’ve missed ya.

Les Says: Aw, Geez, I forgot… I’m supposed to be back at the weight-training, too. I need another 6 hours added to my day, I think.

Whew! I am so glad you blogged. I tell you, I feel so off balance, completely off-kilter, when you make yourself scarce like that! I am very glad, however, that you are getting your driving rights back, and are threatening or promising (depending upon how you look at it) to come and visit. I would LOVE LOVE LOVE LOVE that!

Les Says: This from the gal that won’t answer her cell-phone?! Ha!

No, actually… Wow. Thank you. Seriously, that makes my whole, sleepless 2:15 AM night, it really does.

[You have a backyard to park my trailer in, right? 🙂 ]

I was just about to call out the Mounties for you! I don’t like making left turns either, although I’ve never been slapped over it.

Les Says: LOL! That would be a little like calling in the FBI to look for your dog…

I thought you disappeared into Hiatusville. I came here a few times and there was no blog, just a big blank white space

Les Says: Really? Are you sure it wasn’t a snowstorm?

He slaps you!
Wow, you really have had a rough week, haven’t you?

Les Says: Actually, I kind of enjoy the slapping… Sssshhhhh…. 😉