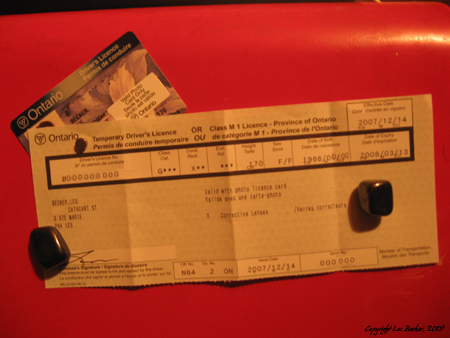 I hold in my hand the first concrete, tangible progress in my New and Fearless Life. Today (months earlier than I expected to, I might add), I successfully completed not only my G1 Exit Driving Test, but the G2 Exit, as well.

Ontario utilizes a “graduated” licensing program. Here’s how it works, as quoted from the Ontario Ministry of Transportation Website.

New drivers of passenger vehicles learn to drive with six important conditions with a G1 licence. A new driver must hold a G1 licence for a minimum of 12 months before attempting the G1 road test. This time can be reduced to eight months if you successfully complete an approved driver education course. Drivers earn more privileges after passing their G1 road test.

As a G1 driver, you are required to:

· be accompanied by a fully licensed driver, who has at least four years driving experience, and a blood alcohol level of less than .05 per cent, in case he/she needs to take over the wheel;

· ensure the accompanying driver is the only other person in the front seat;

· refrain from driving on Ontario’s “400-series” highways or on high speed expressways such as the Queen Elizabeth Way, Don Valley Parkway, Gardiner Expressway, E.C. Row Expressway and the Conestoga Parkway;

· refrain from driving between midnight and 5:00 a.m.

Note: If your accompanying driver is a driving instructor licensed in Ontario, you may drive on any road.

I once held a valid driver’s license. I let it lapse over 15 years ago, because I no longer had a vehicle. And I was afraid to drive on this city’s whacked-out road system; a myriad of one-way streets, and 6-way intersections that resulted from a bunch of little city-sections growing into each other over the years, not to mention a huge hill in the landscape – smack-dab in the middle of town. This place is Tourist Hell – fair warning if you come to visit us. Park your car. Get a cab. I’m not kidding.

When I had been “license-less” for just shy of 10 years, the Ontario government decided to save the lives of inexperienced young drivers province-wide, along with millions of innocent bystanders, by instituting the graduated system. I learned that, because I had a perfect driving record (not difficult when you refuse to actually drive), and assuming I could get the G1 back before the 10-year mark of non-driving, I could take advantage of an “accelerated” program. I wouldn’t have to wait that year to take the road test that would net me the G2. Speaking of which…

New drivers must hold a G2 licence for a minimum of 12 months before they can attempt the G2 road test. At this level, you have more privileges because of your driving experience. You may drive without an accompanying driver on all Ontario roads anytime. However, you are still required to:

To further protect youth on our roads, effective September 1, 2005: the number of young passengers that teen G2 drivers can carry will be limited from midnight to 5 a.m. as follows:

· Initially, G2 drivers 19 or under can carry only one passenger aged 19 or under.

· After the first six months, and until the G2 driver earns a full G licence or turns 20, they can carry only three passengers aged 19 or under.

The passenger restrictions do not apply if the G2 driver is operating a motor vehicle after 5 a.m. and before midnight.

These restrictions will not apply if the G2 driver is accompanied by a full “G” licensed driver (with at least four years driving experience) in the front seat, or if the passengers are immediate family members.

Thirty-one jurisdictions in Canada and the U.S. have some form of teenage passenger restrictions in effect.

Nor would I have to wait the year to take the road test that would net me my full G license. All I had to do was get in there and write the test for the “Beginner’s” or G1 license before I hit the 10th anniversary of my license expiry. Which I did, in April of 2003, with approximately 48 hours to spare.

I could have turned around and taken the G1 exit, followed by the G2 exit without the waiting periods, but I didn’t. I was chicken-shit, remember? Besides, I reasoned, I had five whole years before the G1 expired, so I could practice for awhile and become “not afraid”. The Fly-Girl even offered to take me driving anytime I wanted.

And nearly five years passed. I didn’t get behind the wheel of a car even once.

Fast forward to 2007, my Year of Fearlessness, and my grand plan of travel and blogger-meeting and mobile freelance writing and career changes and a Brand New Me. And no license. Full of fear. Strangled by fear. And now there was a deadline of April 25, 2008 before my legal shortcuts disappeared forever hanging over my head, that if I let pass, would mean I would have to wait nearly three years before I could actually live the dream.

The Old Les would have let that deadline pass and said, “Well, shit. Dead dream.”

The New-and-Improved Les made a plan and blogged a bit of it in April of this year. In October, I picked up the phone, called a local driving school and plunked down a bunch of money on the newly zero-balanced Visa card. In November I started practicing my Fearlessness.

I learned, when I got to the “in-car” portion of my course, that “fear” feels exactly the same as “excitement”. I Love Driving.

Last week, “Slappy”, my Groovy-Cool Driving Instructor, told me I was ready to take my test. I scheduled it for today (with 2 hours of obligatory in-car instruction still to go) and passed. I asked, knowing it was not remotely possible, if there was an open slot available to get back in the driver’s seat of The Fly-Girl’s minivan and take the G2 exit. I passed that an hour later.

So, in another week or so I will receive, via Canada Post, not one but two new “not-temporary” licenses. I have to remember to destroy the correct one. Or is that “destroy the incorrect one, and retain the correct one?” Or should I sell one to some non-licensed, but fearless driver? Ummmm. No. Okay, I’ll be good and not deal in shady ventures. I don’t want to turn “fear” into “excitement” behind bars.

I am now free to rent a car sometime after Christmas, and take my kid to Teeny-Tiny Town to visit Auntie Tootie. We are both very excited, and neither of us is even the least bit afraid. Independence is sweeter than chocolate.

I AM INCREDIBLY PROUD OF MYSELF.

Not-So-Random Song for the Day: “Drive” – The Cars