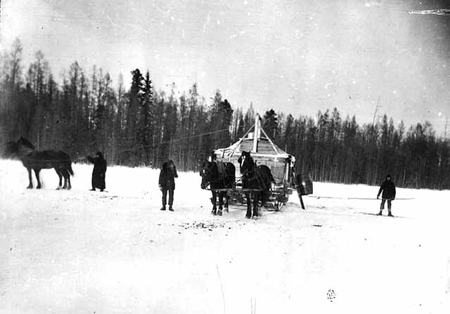 I found this info while looking for links for this waaaaaay back story of my dad’s that he told me on Saturday. I’m still shaking my head.

Ruby says you can’t trust that Internet – and I guess she’s right, this time, at least. This is not a “Ghost Island” I’m about to talk about, although there aren’t many that can say they live there year ’round. And apparently the Canuckian Government Census-Takers ought to make the odd phone call now and again.

Cockburn Island is a ‘ghost’ island in Ontario, which despite the apparent signs of life (there’s a small town and marina) has an official population of zero. The 1996 census listed a population of just two, but both people had left by 2001, making this the least populated incorporated municipality in Canada.

Some of these abandoned houses are supposedly still used as holiday homes, but what interests me if the makeshift airport to be found deep in the forest. It’s evidently still in use but I’ve found no mention of the airport around the internet. Most websites say that the marina is the “only way of getting on the island”, but it’s clearly not. If you asked me, an abandoned island would be the perfect place for an evil empire to keep its headquarters…

Clearly, one can’t believe everything found on the internet. Wikipedia has this to say, slightly (slightly, I say) closer to the truth:

“Cockburn Island is an island in the Canadian province of Ontario, located in the Manitoulin District. It is separated from the westernmost point of Manitoulin Island by the Mississagi Strait, and from Michigan’s Drummond Island by the False Detour Channel.

Cockburn Island had a permanent population of ten in the 2006 Canadian census. The island does, however, have a recreational summer population of anywhere from 50-200 people. In the 2001 census, the island’s population had been reported as zero, due to Statistics Canada’s counting method of rounding off population figures for communities of smaller than 15 people.

It is the least populated incorporated municipality in Canada, and township offices are located on the mainland in Thessalon, actually in the district of Algoma. The island is not connected to either Manitoulin or Drummond Islands by bridge or ferry service. The only available transportation is by private boat or float plane from Manitoulin or Thessalon.

A small portion of the island is taken up by the Cockburn Island 19 Indian reserve, which also has no permanent population; this is a heritage land belonging to a First Nation whose primary community is located on Manitoulin Island. The remainder constitutes the township of Cockburn Island.”

First of all, the “airport” is an airstrip, upon which small planes can land and take off, and sometimes, they even do! In really stormy weather, when you can’t get out by boat, and you have a heart attack, or appendicitis, or you fall out of your tree, making a radio-call for a plane is the only way off the island to a doctor… assuming the weather isn’t so bad that a plane can’t fly, in which case, you’d be SOL. Luckily, this doesn’t happen often.

Secondively (Suzism), “both people had left by 2001″…?! Nope. One died, and her husband most likely spent that winter on the Manitoulin. He went back to Cockburn, though, and eventually remarried. Ummm. Not sure where he found her, but it probably wasn’t anywhere on the Island itself, which is only 15 miles across – hard to miss a woman, even if she’s trying to hide. I haven’t met the new wife, but my kid has, and she says the new wife is pretty groovy. They raise peacocks. Or something.

Thirdly, Cockburn Island proper is now privately owned, by some rich guy from somewhere in the U.S. I haven’t met the new owner, but my parents have, and they say he’s pretty groovy, too…. He’s let everybody that owns land and buildings keep what’s theirs… I think they have to sell to him when they’re sick of the place or something. Fair enough, I guess.

AND….. no. It’s not pronounced the way you’re laughing at, either… It’s pronounced “CO-burn.” Stop laughing, now.

So how do I know all this? Well, my parents are “Haweaters,” having been born and raised on Manitoulin Island, as opposed to “Sandtrampers”, which is what they’d be if they’d been born and raised on Cockburn Island. There’s always been a fairly friendly rivalry between the Haweaters and the Sandtrampers. Having been raised by Haweaters, but having spent much of my childhood on Cockburn Island, I wonder if I might be able to call myself a Hawtramper…? Sandeater…? Hmmmmm….

Thessalon is where *I* was born and raised. I generally refer to it here, Where the Walls are Soft, as “Teeny-Tiny Town”. My dad opened up a farm machinery sales business in “Teeny-Tiny Town” in 1947, married my mom in ’48 and moved her there from the Manitoulin. His business turned into a Ford dealership (please, no “Found On Road Dead” jokes…) and eventually, he sold it – 1977, that was, and got himself a job rebuilding, and then captaining a big ol’ steel tugboat called “The Debbie-Cin”, with which he hauled a barge back and forth from Cockburn Island to Thessalon for The Midway Lumber Company.

Dad had a cottage on Cockburn Island by then, although we’d spent many summers docked at the so-called “marina” (cement pier) there, before the camp, as we Northerners call a “cottage”, was built. The town on Cockburn, by the way, is called “Tolsmaville”. So there, Internet. I taught you something.

Anyway, back to the job my dad had, hauling timber on a barge… it’s interesting, mainly because my mom and I got to go back and forth with him. What would have been an hour’s boat ride in my dad’s 31 ft cabin cruiser took about four hours in The Debbie-Cin. That’s when we were towing an empty barge from Thessalon to Cockburn. The return trip, with a full barge, was more like 7 or 8 hours. I did a lot of reading that summer.

But it’s even more interesting, now that I learn that my dad came full circle when he got that job. He had another job hauling stuff from Thessalon to Cockburn during The Dirty Thirties. 1938, to be exact. He was 18 years old.

That was my first job off the Manitoulin. I guess it was my first job for anybody other than my own dad, now I think it through a little. My brother Marvin got it for me. He’d been hired to haul hay to Cockburn from Thessalon, because he had a team of horses. Not everybody did, you know, and most of them worked in the bush hauling out timber, although you didn’t see much of that in the winter, I guess.

The boats couldn’t run in the winter, obviously, and sometimes Marvin would get a job carrying the mail, or hauling farm parts over the ice. There was a lot of people living there then – they didn’t start moving off the Island until after the War started. World War II, I mean.

Me: That’s when the ferry stopped, wasn’t it?

Me: The ferry from Meldrum Bay to Cockburn.

(snorts) I don’t know where you hear this stuff. There wasn’t no ferry from the Manitoulin to Cockburn! You’re all mixed up. They tried running a ferry from Blind River to Cockburn for awhile, but they couldn’t make a go of it, and it shut down after a year.

Right, Marvin had a team of horses… So, he could usually get a job hauling something in the winter. He didn’t have a boat, so people like Bill Jones made runs in the summer, carrying the mail, and goods, and people back and forth between Cockburn and Meldrum and Thessalon, but Bill would usually hire Marvin to help out in the winter, and that year Marvin asked me to give him a hand. They had hay to haul from Thessalon to Cockburn, and Bill Jones only had Marvin’s team, and his own and one other to do it. Gord Nichols, I think it was.

Remember how we’d go on the snow machines and follow the tree-line? That made the trip easier, when they set out everybody’s Christmas trees in a line all the way from the breakwater in Thessalon to the breakwater on Cockburn. Any old idjit could follow that. They didn’t do that in 1938, though, and a lot of idjits got lost and froze to death. (laughs)

Bill Jones knew what he was doing, though. He’d been doing it awhile. It was my first real job, and I was nervous. We had to haul a great big sleigh full of hay, and I was driving. I didn’t have to worry much about getting lost, because I was following Bill, and Gord Nichols was behind me. I was kind of leery of the ice, mind you, because the Great Lakes don’t really freeze. We were on the North Channel, and you could usually count on decent ice, but you had to be careful because there’d be air pockets, and sometimes you’d hit open water real sudden. Lots of people went in, and lots of people lost their teams.

Anyway, we got about half-way to Cockburn and decided to stop for lunch. It was cold as hell, and we stomped around a lot, clapping our hands to ward off frost bite. Remember how I used to make you do that at the half-way mark? You gotta make sure to do that now and again – if you sit still too long your toes’ll fall right off, when you take your boots off.

So we stomped around and unhitched the teams and led them up to the back of Bill’s sleigh to feed. We were just about to eat lunch ourselves, when Bill noticed the water coming up around his feet. He started to yell at us all to get the hell away RIGHT NOW!!! I never run so fast in my life!

Marvin had the double-trees and he’d just managed to hook the goose-neck into them (Les Says: I have no idea what that means, but I didn’t want to interrupt him at this point…) when the back end of the bob went down through the ice and dumped all of Bill’s hay into the channel.

I don’t remember who hitched up Marvin’s team, might even have been me, but all of a sudden we were flying over the ice, with Bill yelling to spread out so we didn’t all go down at once for the weight. I was scared to death and I didn’t have anybody to follow anymore. I was sure I’d somehow do something wrong, so I kept trying to hand the lines over to Marvin, but he wouldn’t take them.

I found out later, that Marvin had already lost two teams that winter, delivering mail, and that’s why he had me driving in the first place! I was mad over that for a long time.

We did finally get to Cockburn. We’d lost a sleighful of hay, but the horses all got there, and so did we, so I guess it could have been worse.

But I never hired on with Marvin for a run like that again.

Random Song for the Day: “Oh No” – Gogol Bordello

7 Replies to “Ruby’s Right – You Can’t Trust That Internet.”