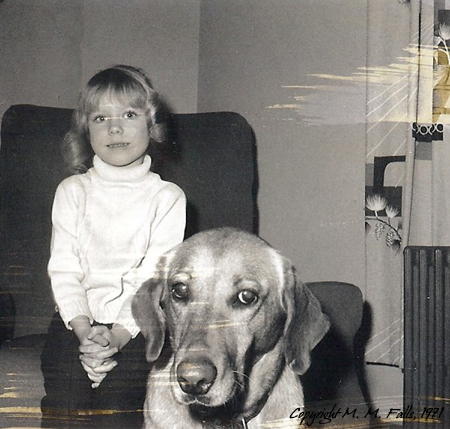 Ah, yes, appearances can be deceiving, though, can’t they? The dog knows differently, you can tell by the look on her face.

This picture was taken by my father in 1971. I would have been around 5 at the time. The dog (her name was Goldie), was 4, and I think my dad might have loved her as much as, if not more than, he loved me. He never once forgot her name, whereas I still get referred to as “Vel-errr…Kar-errr… Lisa! No…. Diddly-Do-Over-There”. He does that to all his kids, mind you, so it’s not like I’m singled out. He had too many kids, and just the one dog.

She was old and had been through some tough times – surgery for removal of an “India Rubber” ball she accidentally swallowed (my dad still has that – ask him where my first tooth is, though) … rheumatism resulting from being accidentally run over (by my dad!!!!)… poor ol’ dog.

My parents didn’t tell me they’d put Goldie down until 4 days after the deed was done, because I was in the middle of a monstrous school project. They were worried I would be so upset that I’d get a bad mark. I cried. A lot. Not because the dog was gone, so much as I felt guilty that I hadn’t wondered where she was for 4 days. Some friend I turned out to be.

ANYWAY…. that’s not what this post is about. It’s about an incident that happened around the year this picture was taken – and probably the reason I hate cooking so much…

I think we were on Cockburn Island (stop laughing, Suzi), but it could have been one of a myriad of other islands in the North Channel that we “boated” to. I know there were other families there –

B) because My Brother the Trespasser wouldn’t play with me, and it took other kids present for such a thing to happen.

So, all the other kids, being older, were… I don’t know…. gone, and I was left all by my lonesome 5-year-oldness to amuse myself. Under the arguable watchful-eyedness of a bunch of drunks. I could hardly help but get into trouble.

We were BBQ-ing that night. Well, the other families were BBQ-ing. Ours was “Hibachi-ing”. My dad loved his little Hibachi, because it didn’t need any dismantling for storage (we lived on a boat in the summer, remember?), or have to be strapped down on the deck.

Yes. Very small. Very low to the ground. About up to a 5-year-old’s shins. Reachable, in other words, to both a 5-year-old girl who only looked like an angel, and a 4-year-old dog who would eat anything within reach provided my dad wasn’t yelling “UUT! Oh, NO YOU DON’T!!” at the time. As I recall, that worked on both dog and girl equally well.

But, as you will recall, my dad was three sheets to the wind. And he did a silly thing. He told me (ME!) to “keep an eye on the Hibachi and make sure Goldie doesn’t get into the hamburgers.” Imagine that! And then he went back to his lawn chair, his rum, his buddies, and Nat King Cole on the 8-track.

So, I picked up the spatula and “kept an eye on the Hibachi”. As well as any 5-year-old who’d never wielded a spatula before could….

Now, this is about the point where the way my parents tell this story and the truth part ways. Ahem…*

To my knowledge, my parents don’t read my blog… in fact, I’m pretty sure that My Brother the Trespasser is the only member of my family who ever has, and I’m not even sure of that, truthfully… but if I get in trouble for the following admission, I will be forced to inform my parents who it was that taught me how to remove a locked wine-cellar door from its hinges quickly and silently, and put it back the way I found it, equally quickly and equally silently. Not to mention the party I swore I’d keep quiet about in exchange for such a valuable education. I swear I’ll tell. Fair warning, oh Brother Mine.

My parents maintain that I was “playing house”. That I “didn’t know any better”. That I just “had quite the imagination as a child”. Ri-ight. Goldie would have ratted me out in a heartbeat if my dad had thought to offer a milk bone. As it was, I think she may have scored the whole meal.

I was trying to flip the hamburgers over. I knew it had to be done; I could smell them burning. No amount of arm-waving, or sleeve-pulling, or “excuse-me-ing” could get my dad’s attention, and truthfully, it never once occurred to me to go to my mother because this emergency pertained to The Hibachi, which was most definitely my father’s turf.

And he ignored me.

And I saw my chance to finally be The Hero, and save supper.

So, I gingerly slid the spatula under a hamburger patty, and attempted to deftly flip it over, whereupon it promptly flipped off the Hibachi. Into the sand. Of course. May I remind you at this point, that I was 5.

But it can be disguised.

On all the other hamburger patties.

You can fit about eight hamburgers on an Hibachi grill. It takes approximately ten minutes for a 5-year-old girl-that-looks-like-an-angel-but-who-has-an-imagination to drop seven hamburger patties in the sand (on purpose!), scrape as much sand off as possible, and return them to the grill, sand-side-down.

They didn’t catch on until the second bite, as I recall, but they haven’t let me forget it, since. I believe we had bologna sandwiches for supper that night. Goldie ate sandy hamburger.