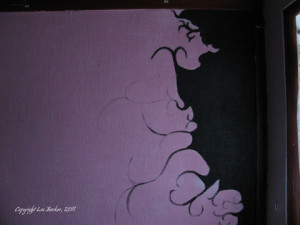 I started another wall panel in my attic cave… I began with the idea of a plain pink wall – pink representing “action” of sorts. I have a lot of stuff that I have to act on, and soon.

In the course of painting… well… I ran out of pink paint. Kyla had an epiphany, and began painting black curliques drifting into the pink. She took a break, and I picked up the brush. This is where I left off.

The “act on and soon” stuff is pending: a supplementary job – preferrably NOT of the retail variety, to make up for recent lost hours. I seem to have been suddenly and unceremoniously dropped to part time hours… the “suddenly” actually works in my favour… I don’t have time to worry about it. I have to do something about it, and do it FAST. 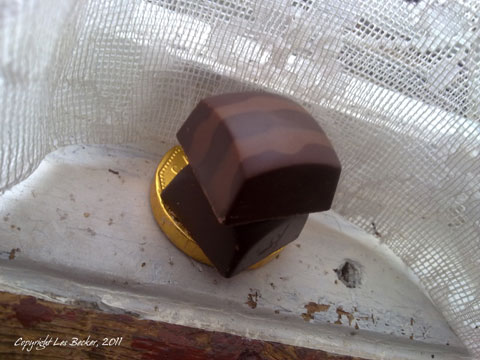 I’ve resolved to limit my daily chocolate intake. You’re looking at it up there. My daily limit.

Not counting the one in my mouth right now, of course.

Another gift from my songbird….

See my kid? That’s my kid up there. She’s a songwriter. Check out one of her latest below. 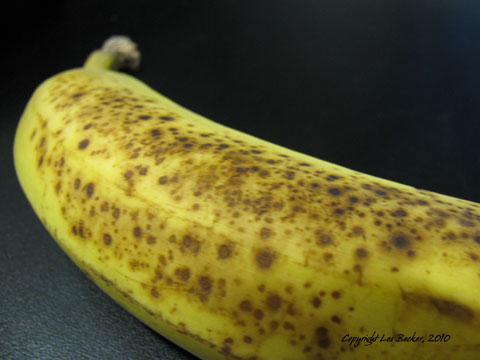 Yes, I’m in the running for the “Not Necessarily Banal Blog Title” crown. And I have been feeling rather like that banana looks as though it must.

I kinda fell off the internet for a while, there. And y’all know how much I hate the real world.

Then my mom died, on December 1st. I haven’t yet got accustomed to that. I want to write about her, but I’m still trying to fathom that she’s gone.

When I got the call about my dad’s death a couple of summers ago, I sat down and wrote my goodbye to him and rushed it out into the ether.

It seems so much more complicated with my mother. There are a thousand little memories that bring her into my mind – smells, certain songs, every different season. Food.

No, I think my mom’s going to get more than one goodbye, here. Just not quite yet.

Work has been stupid. Christmas. Ugh. I swear (again) that I will not do another Christmas in Retail next year. One of these years, that’s got to stick.

My own Christmas was quiet and lovely. I received two housecoats, a bottle of rum and enough chocolate to live on for three days straight. I made good use of all of the above. And I even have housecoats left over!