Here’s yesterday’s interview about The Waitress. It was SO much fun!

I’ll be posting in a day or two about what a freaky-deaky set of mishaps I had leading up to it… nearly didn’t manage it at all.

Meantime, if you haven’t already, PLEASE pick up a copy of the book. This “Starving Artist” phase ain’t nearly as romantic as the media makes it out to be…

Check Out Books Podcasts at Blog Talk Radio with WritersOnlineNetwork Radio on BlogTalkRadio
CHECK IT OUT! I’m SO excited! Not to mention, a little terrified… 😉

You can listen in at 4 pm Central Time (5 pm Eastern) at this link:

Here’s What the WON BTR site has to say…

END_OF_DOCUMENT_TOKEN_TO_BE_REPLACED

How little can you live on?

Me? Very little. This is what my monthly bills work out to:

Which I am. Again.

(but “just a little bit”) LOL! Listen to me; trying to make excuses!

My debt is with 2 credit cards. 1 card has substantially more debt than the other; it also has a much higher interest rate.

According to The Rules of the Credit Card, I can’t use either of these cards – at all – until the debts are paid down. Then, I can only use them as a “money tool” – they can’t cost me money to use, they should save me money in some manner by using them, and/or, better yet, they should earn me money somehow.

All of my “extra” money – money earned that is not ear-marked for bare-bones expenses (stuff I can’t or won’t live without), will be thrown at that debt until I kill it.

So, if I take home, on average, $1500 monthly and my bare-bones expenses total $1075, my so-called “extra” money comes out to about $425. This is what I’m going to throw at my debt every month: $300 will go on the card with the lowest balance – because it will be paid off really quickly, and that will make me feel like I’m getting somewhere. It helps to feel like you’re winning when playing The Money Game, believe me.

Check out this screen shot: 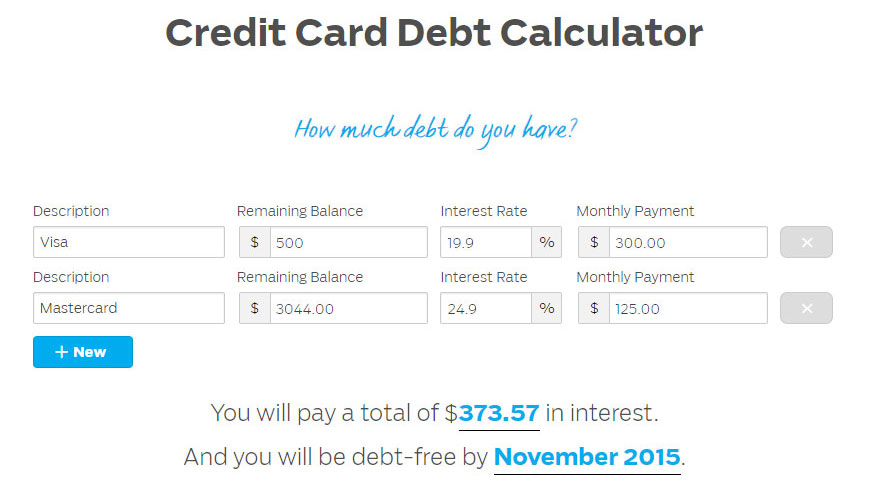 So I’m looking at 9-10 more months paying this debt down and then I’ll be moving on (again) to investing in Pre-paid Living. That is a whole ‘nother kind of Money Game!

P.S. That Credit Card Calculator is available to use for free HERE.

P.P.S. *I WILL NOT live without Netflix OR the Internet! 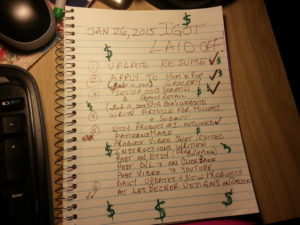 I suddenly find myself laid off, as I’m still paying down my now “smallish” debt, and beginning to hoard for my pre-paid life.

No income once my final check is paid to me in two days’ time. Trust me, that money is earmarked for survival!

Don’t know yet if I’m eligible for E.I. (“Employment Insurance” – government funds I’ve been paying into with every paycheck since I went back to work). Remember, I failed miserably at my “Early Retirement” and I may not have enough employed weeks logged to get on the program. I took NO E.I. during said “Retirement” – I’m hoping that works in my favour…

Meantime, my February 2015 Money Challenge to myself is to get a new job and begin earning at least what I lost before the end of the month.

I’ve updated the resume, and applied at a Mom ‘n Pop Grocery nearby. I could be doing anything – from working in the deli, stocking shelves, making pizza, cleaning, running a till…. I think it would be an interesting place to work.

I’ve also started a job search at a Family Retail Big Boxish type store. It has a bzillion departments (including electronics AND groceries!), so I could be doing anything there, too. So far, there are no job openings.

In the meantime, I’m also working on my Etzy store, building products for Les Becker Designs, taking two marketing courses, and working on several downloadable digital products (including one for this site).

My goal is to bring in $1250 in take-home pay during February 2015. And then again for March. And so forth. In the process, I’m already forced into the original February Money Challenge I was going to post prior to being laid off: Make February a “Dry Spending” month… meaning Absolutely NO unnecessary spending. Zero.

I’m winning that one so far. 😀

P.P.S. The drawback to all these challenges is that fiction writing seems to have been put on a back burner. This will not do. 🙁 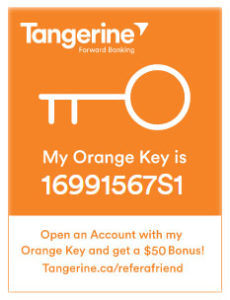 Open an Account using my Orange Key and receive a $50* Bonus!

I want you to experience Forward Banking™ with Tangerine. You can save on fees, earn great interest, enjoy cash Bonuses and take charge of your money.

Open a Tangerine Account – any type of Account – by March 31, 2015 with a minimum deposit of $100 using my Orange Key (16991567S1) and earn a $50 Bonus*. Plus, get an additional $25 Bonus** when you set up an Automatic Savings Program (ASP) into a Tangerine Savings Account with a minimum $100 per month for 6 continuous months! Simply set the amount and frequency you want to save and the ASP moves your money into your Savings Account automatically.

All you need to do is enter my Orange Key when you are opening your Account on tangerine.ca. Or visit Tangerine to learn more and start saving today!

I’m working on the referral for the U.S. version – will update when info is available.

I’m not sure I even know where to begin…

I was asleep when the ball dropped – woke up when the kids all called for rides home at the same time. It took me three trips, and I drive a mini-van. That’s a lot of drunken 20-somethings…

That old saw about “how you ring in the New Year is an indicator of how your year will go” is flat-out bullshit, if my January has anything to say about it, by the way. I’d have thought January would be a calm and steady same-old, same-old kind of routine month.