I refuse to juggle anymore. It’s been one thing after another again lately. I dealt with the crowds of people all last week. I kind of thought I had it together there. I thought wrong. The shit continues to hit the fan. Most of the time it’s either not my shit, or not my fan.

Between injuries, school exams that aren’t happening, job applications, and nasty phone calls in the middle of job interviews (note to self: next bridge crossed, pitch cell phone into river.), I have decided to shut down and deal with things one at a time from now on. I don’t care how important so-and-so thinks the next emergency is, it will wait its turn or it will disappear without being dealt with at all. 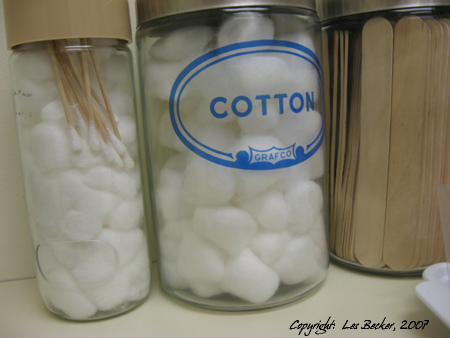 Guess where we went…? 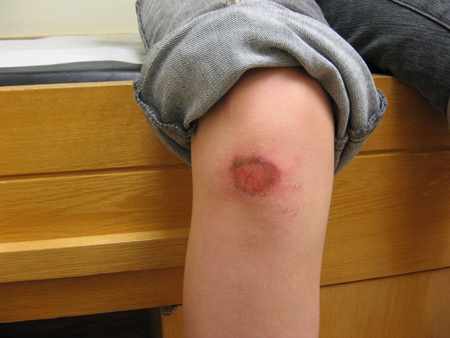 For the road rash… 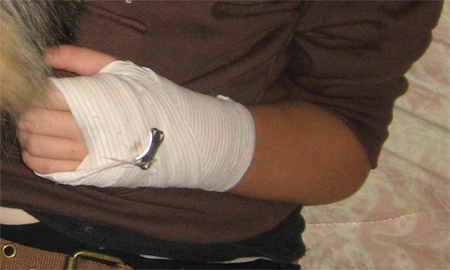 And the sprained wrist…

Yeah. We got lucky though. We actually have a family doctor, while others have been on waiting lists for five or more years. I estimate that we saved up to four hours of sitting in the emergency room because Dr. Who snuck us in to the office at the end of his day and ordered up x-rays before sending us off to the germy hive that passes for a hospital here.

The wait (3+ hours) was still excruciating for the poor kid, though, and I believe she will think twice next time, before jumping off the back of another kid’s bicycle pegs. In the dark. While still in motion.

It’s not all bad, mind you. As far as the J.O.B. hunt goes, I’ve landed an interview for one of the temp positions that I really want, and have had an interview for one of the positions that I’d rather not take, but will if I must, as opposed to starve. On the web development front, I’ve done the work for my freelance job, and only have clean-up left to do – just waiting on the info to finish. And, ummmm, the cash. And, joy of all joys, I have another freelance web design/development contract in the works! Enough of these one after another, and I could continue to work pants-less on an ongoing basis.

I finally wrote an exam I’d been putting off (82%). I’ve scheduled my last two exams, which I have yet to crack a book for, for tomorrow, and I refuse to be nervous about either of them, mainly because I really no longer care.

I’ve also been playing with the camera. What say ye to this…? 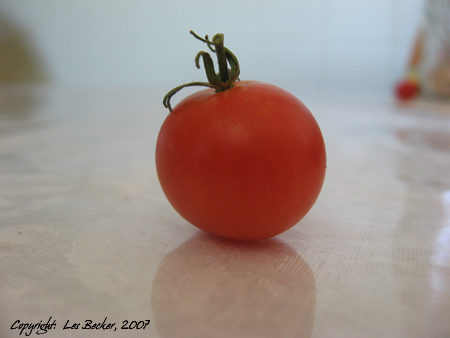 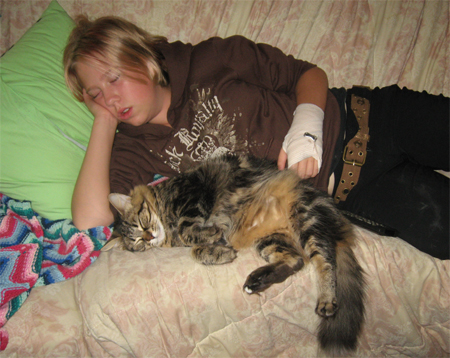 Life is tough for all of us at the moment…

My Un-Brother, Ken and his new wife Sylvia made the trip to visit us from Fort MacMurray to show off their new wheels – bought by the insurance company that covered the damage done from the freak hailstorm that hit ten minutes after they said “I Do.” Now, if that ain’t God talkin’, I don’t know what it is. I tried to warn them. They didn’t listen. Now they have a brand new truck. Shows what I know. 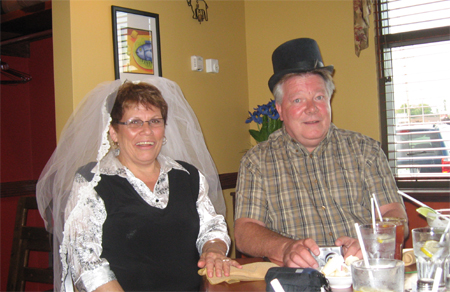 A “wedding dinner” was hosted for them at a local restaurant on Tuesday evening. Ky wanted to sing for them as her wedding gift. I told them it was from me, too, ‘cuz I don’t “do” weddings, and I’m a miser. I only went to the dinner for the free food and beer. 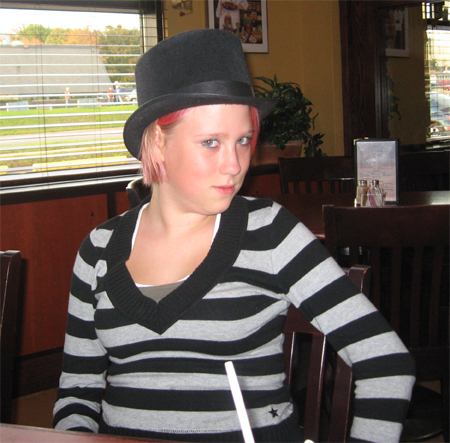 And now for your listening pleasure, a small snippet of Ky’s “Wedding Song” for the Happy Couple: “Can You Feel the Love Tonight”, sung a cappella.


I spent money I don’t have on something I don’t need. That doesn’t make having it now any less necessary, mind you. Now that I’ve got the damned thing, it’s as necessary as the Internet. Or air.

I went out to the dreaded mall. I went out with the best of intentions – to get those dress slacks I couldn’t find yesterday in a safer place. Found ’em! They even fit. Sort of.

Then, I did a silly thing and went to visit Louie, and there found The Necessary Thing. No, I should not have bought it. Yes, I feel guilty.

PS… I sold a silly little “blip” to an online funny-papers kind of place. Not what I expected for a first sale, but you won’t hear me complaining, either.

Random Song for the Day: “The Mariner’s Revenge Song” – The Decemberists [the song displayed on my shiny, new, (and necessary) MP3 player]

Apparently, there is another writer in the family. [[ DAMN! She killed her blog; can’t show her off anymore. 🙁 ]] – spell checked and the whole nine yards…

Kyla’s Spring Concert for Thomas Walls School of Music took place on Sunday, May 6th. We woke up having forgotten all about it, believe it or not, and once I remembered, and hustled Ky into a practice, we discovered she couldn’t sing. Seriously. Panic ensued. It’s all explained in the video intro, and she did manage to sing, but I thought I’d give a reason for her “frogginess”. And then there was the Quack, also explained in the video.

The concert was MC’d, as usual, by James Warner-Smith, a talented, radio dee-jayish sort of fella from here in the Sault. Mentioned my blog, he did. He also “called the cut” at the end of the video, and I was dumb enough to do what I was told and turn the camera off… and miss him finding a dryer sheet up his sleeve and pulling it out like a magician. Sucked.

Another new favourite – this one I first saw when Ky and I went to see Bridge to Terabithia.

Okay, so I’m grasping at straws here – I’m not finding many things yet to smile about in real life – so I’m going to “fake it ’til I make it” online, at least. And at least I’m not stuck working in a call center… yes, I got the freelance job I was after. Hopefully, it will turn into something more permanent.

Meantime, Mika’s “Grace Kelly” makes me smile no matter how bad it gets. And just when I think it’s as bad as it can get…

I think I finally have most of the music back – holy shit, but it took forever (sorry, Mom; I said “shit” on my blog – shit, shit, shit, shit, shit. Yeah, I’ll probably take that down first complaint I get, now that I’ve gone gutless…)!

I can’t say for sure that I’ve got all the stuff I want, since I never knew song titles or band names of anything that was on the playlist for the last few years unless I specifically asked, which, of course, I didn’t generally think to do, but live365 came through for me with a bunch of it, not to mention introducing me to a whole bunch of new artists, such as The Decemberists who are a new recent fave for me.

Gotta love the internet – the best and worst of everything left. I don’t shut the computers off at all anymore.

Random Song for the Day: “16 Military Wives” – The Decemberists 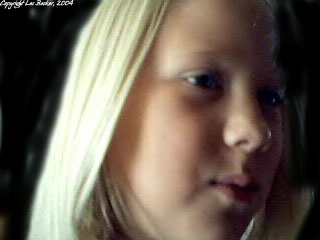 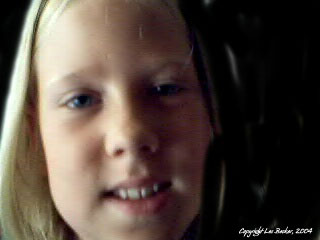 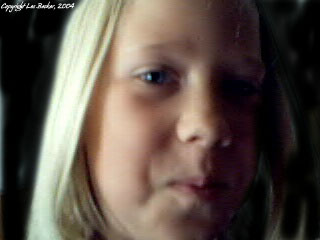 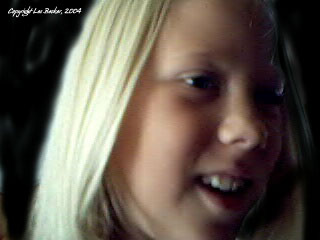 More “People” buttons in the making! Yes, that’s right, folks – I have hired my own child for unpaid slave labour to help market this sitcom production. One of the above photos will be come Kyla’s HPB “People” button at the Flash site – the rest will be used on her brand new blog, which she has diced to call The Blog of Turkey.

Seriously, she chose this herself. The Turkey.

Random Song-for-the-Day: “Lets Get It Started” – The Black-Eyed Peas