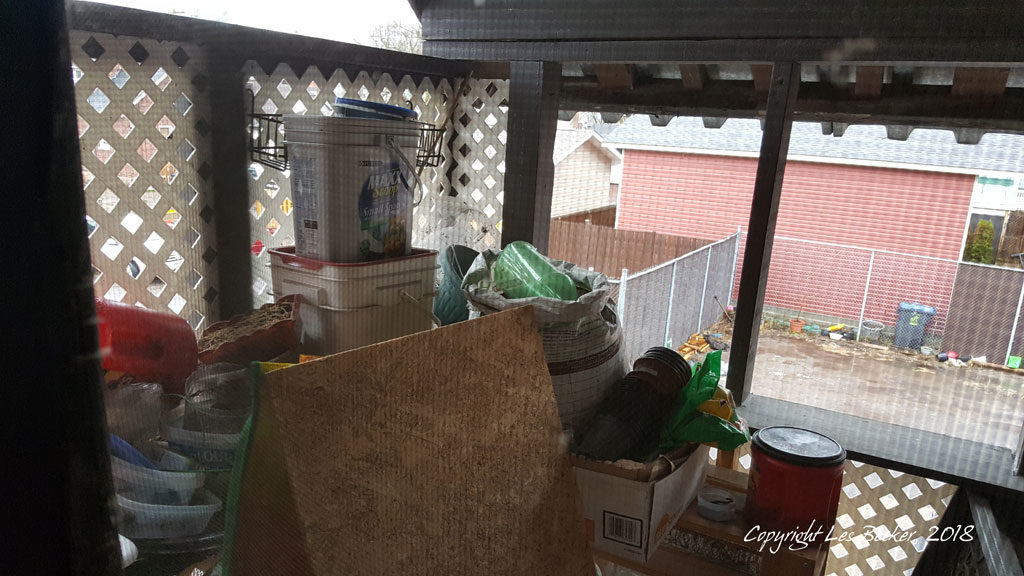 The time has come. The jumbled space you see above will soon make way for my second greenhouse build, on the 2nd floor balcony of my building.

This should have been done last fall, but The Reno from Hell (which is still, as I write this, the Unfinished Reno from Hell) was just beginning and I figured I would get at the greenhouse as soon as the 6 week reno was done.

Before the snow flew.

And then the snow flew and just kept on flying, long after Spring should have sprung, and the whole city has been depressed over it.

And the “6-week” reno is still not complete.

I’ve given up on the reno, but not the greenhouse, which would have made this just-past extra long winter a little more bearable, had I got the build done when I originally planned. 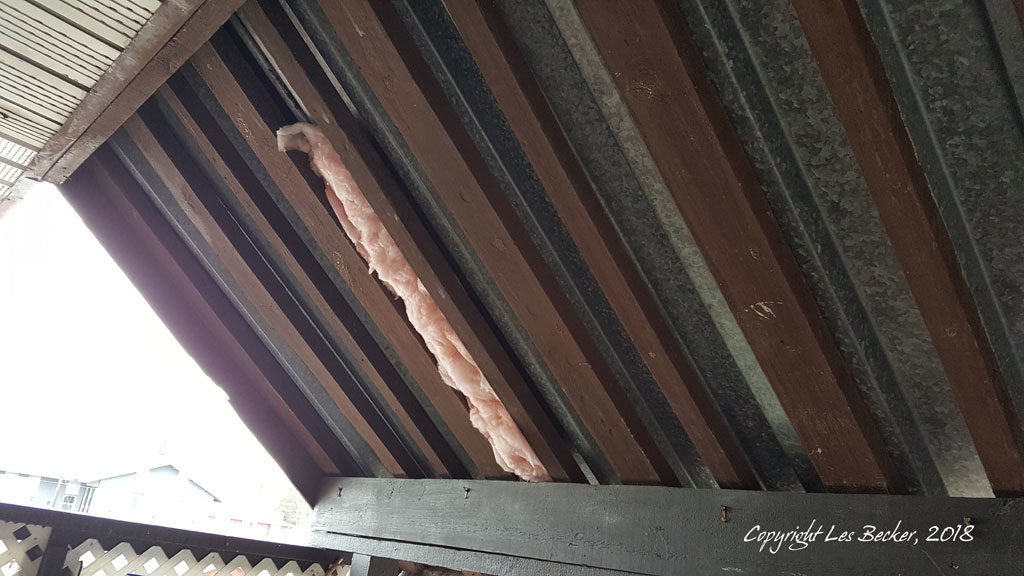 I lucked into a bag of insulation “ends” that was left outside next to my recycling split carts. Apparently, the erstwhile renovator decided that the City would take it with the household garbage – and that it wouldn’t be blown down John St. in a high wind. Both of these things proved false, but during the retrieval of the tumbleweed insulation, I decided I could put the ends to good use.

You can see my plan in the above photo – I don’t think I’ll even have to cut any insulation – just tuck it all up before I staple the moisture barrier over it. 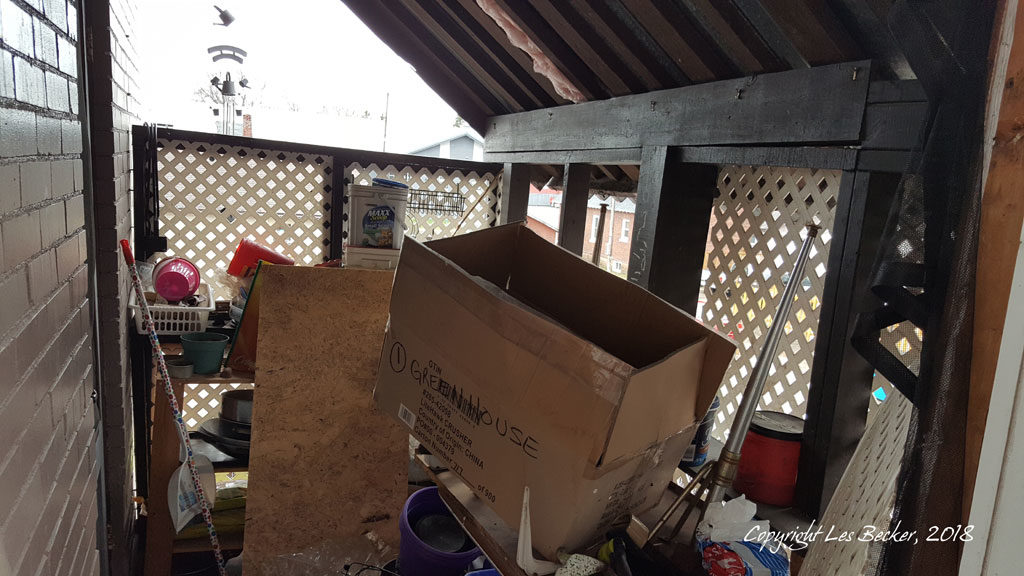 By the end of today, I’m hoping that I’ll have the roof insulated and the end wall plastic up. The white plastic lattice will come down first (I have another use for that – several uses if I end up with enough lattice), and then the plastic will go up by various means, including a staple gun and sealing tape.

When I built my first greenhouse on the third floor balcony several years ago, I was pretty sure that staples and sealing tape would blow apart fairly quickly, but I was dead wrong. Over four years, all I had to do was patch a few holes in the plastic now and again. Hopefully, this level will hold up as well. 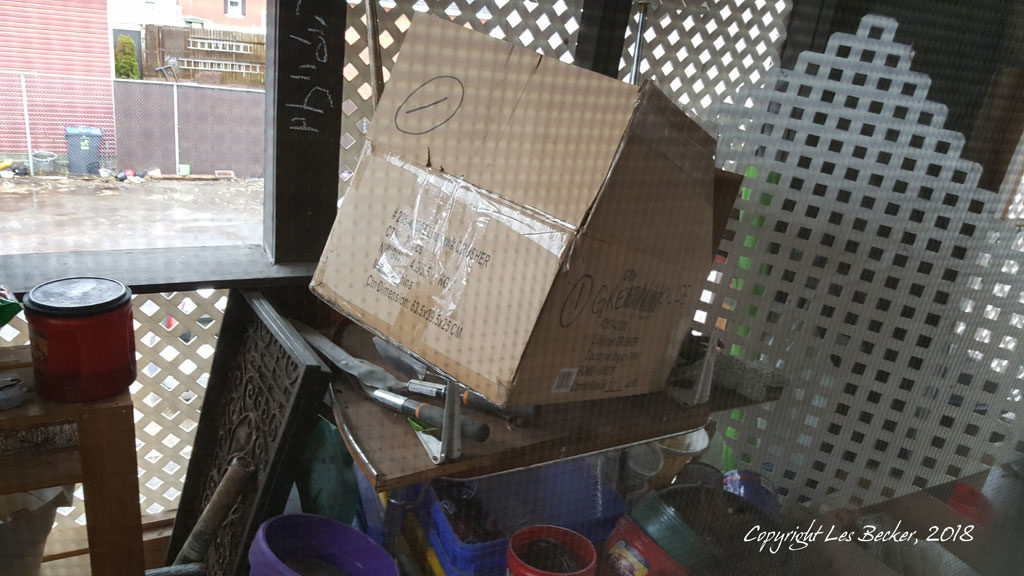 All of the junk out here is gardening junk. The Tarmac Garden in the parking lot has not yet been cleaned up after the winter, but most of this stuff can now be safely moved down and temporarily hidden under the back deck until the lot is shoveled and swept and planting can begin – aiming for no later than May 24th this year. We’ll have to see how that pans out.

So, as usual, I have a thousand small steps to take to get two tasks of this project done today. I generally fail miserably at scheduling, so I’m not sure it’s even feasible, but the sun doesn’t go down until 8:51 pm… how much do you think I can cram into 6 hours?

My little balcony greenhouse seems to be doing surprisingly well… I really didn’t expect this. The above photo shows most of the very tiny space.

I planted this cucumber from seed in October of 2015 – it’s still really tiny, as cucumber plants go; even cucumber plants grown in pots, if my summer parking lot garden of 2015 is any indication – and yet, it’s flowering! I can see a few more buds coming, which I’m grateful for, as I think I’ll have to propagate it by hand. Wish me luck with that.