Jimmy Prentice was somewhat of a local oddball, to hear my parents talk. I don’t know if he actually had a home, or not. My mother talks about how sometimes, just before dinner was set to be “lifted”, Gramma would be looking out the kitchen window, and say, “Better put another plate on,” and they knew Jimmy was walking across the field.

He’d come in and have dinner with the family, and afterward, off he’d go with the men to do the afternoon chores. They had a farm of dairy cows – help with the chores was welcomed, and well worth a meal or two, even during the Depression. More than likely, Jimmy would be in for supper that night, too. And then for breakfast in the morning…

He’d stay on a few days (or weeks), help with the farm, eat with the family, sleep wherever there was room. Then he’d mosey off across the field; to the next farm, maybe, or into town.

One winter evening, during the War, Grampa opened the door to a very, very sick Jimmy Prentice. Flu was a pretty serious thing to come down with back then, and Grampa put him right to bed. He was sick for a long time.

Gramma and Grampa fed him up, cleaned him up, generally took care of him for the duration. No way would Grampa turn Jimmy out. Not because it was winter on the Manitoulin. Not because Jimmy had the flu. Nope. Jimmy Prentice had a radio.

Now, Grampa wasn’t necessarily against technology, but in the early ’40s, with farmhands and livestock to feed, not to mention 8 kids (minus Bill, who was overseas fighting a War), purchasing a radio was not high up on his list of priorities, to say the least. They got “The Family Herald” once a week for the War news; what did they need a radio for? 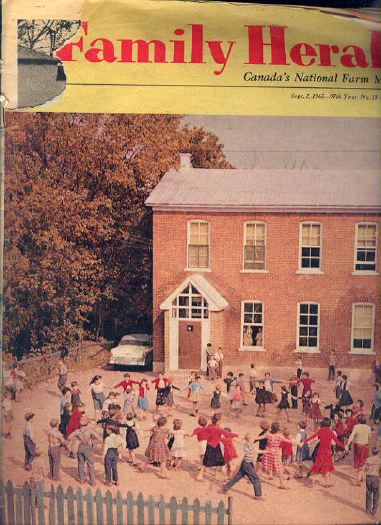 The Family Herald would be read cover-to-cover by Grampa, the day it came. Then Gramma got her turn, and then it was passed around the household until everyone had had a chance to read it through. Sometimes, clippings would be mailed out to a sister or an Aunt. By the time the next issue came to the farm, the last would be in tatters, most likely relegated to the outhouse, where it was read again, and reread, and then “recycled”.

Letters from Bill (and he wrote to everybody from overseas) would also be passed around. Sometimes the letters were delayed, or lost altogether. News was shared. As worried as they were, the family knew that last month, at least, Bill was alive.

And then… Grampa discovered that the War News could come every supper-time, if somebody turned Jimmy Prentice’s radio on. Meals became sombre affairs, quiet, other than the static-y voice coming out of that little box on the sideboard. No one dared make a peep, for fear Grampa would shout them back to silence. World War II got closer to home.

Of course, over the next several weeks, Jimmy Prentice got better. Pretty soon, he was taking supper at the table, listening to the radio, and then, slowly, out helping with the chores again. Eventually, he decided it was time to mosey over the field to wherever it was he would go; the next farm, maybe, or into town. And, of course, he took his radio with him when he went.

Supper was eerily silent for the next few days. Grampa was out of sorts without the static-y voice on the sideboard. Withdrawal. They all missed Jimmy Prentice’s radio. The Family Herald was days away yet, and the news in it would be “old” news. Bill seemed farther away than ever, and World War II might never end…

And so, one day, Grampa came home with a radio of his own, and everything seemed that much better. The world was smaller again, and if it – the world or the War – should finally come to an end, he would be among the first to know.

“There’ll be bluebirds over
The white cliffs of Dover,
Tomorrow
Just you wait and see.

There’ll be joy and laughter
And peace ever after,
Tomorrow
When the world is free.

The shepherd will tend his sheep
The valley will bloom again,
And Jimmy will go to sleep
In his own little room again.

There’ll be bluebirds over
The white cliffs of Dover,
Tomorrow
Just you wait and see.”

Not-So-Random Song for the Day: “The White Cliffs of Dover” – Vera Lynn