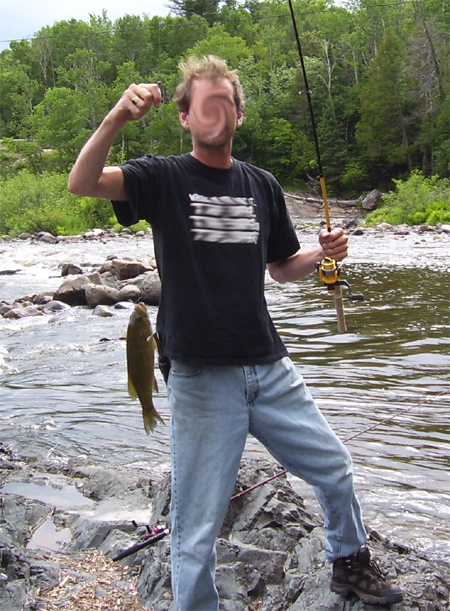 Muddy by the Water

I have this buddy who is an incredible cook and a hot-shit photographer. My kid is very partial to him, because he spoils her with pickles. She calls him “Muddy”, and I think he’s rather partial to her, as well, because whenever we walk into his restaurant, he has a bowlful of pickles up on the chute before we even get to the table.

As it happens, Muddy’s restaurant is one of Ruby’s favourites, and that’s where she took us out for dinner the other night (Ruby is very partial to my kid, too – I only got to tag along because I have the wheels).

Once we had our bellies crammed full of comfort food (and pickles), I noticed Muddy had snuck out the back, so I followed him out to smoke cigarettes and talk (Photo)shop…

He had just come back from a fishing trip, although he doesn’t fish. At all. Has no interest in fishing whatsoever. When his pals go off a-fishin’, Muddy tags along with his camera…

This particular trip, nobody was having any luck. The fish weren’t biting. At all. The Muddy-Buddies were disgusted. So much so, that they decided to all wander off on a hike, trusting Muddy to watch the gear. Muddy figured he could handle this, although he only knows the business end of a fishing rod because it’s generally the one pointing at the water.

Muddy wanted duck pictures, anyway, so he was happy to “watch” the gear…

The ducks weren’t cooperating any more than the fish that day. They kept swimming so that the fishing rods, propped up against the rocks on the shore, lines still in the water, were between themselves and Muddy’s camera.

Muddy was determined to get his shot, however, and he finally decided to get rid of the rods….

Of course, this was not a matter of just picking up a rod and moving it. No… Muddy had to figure out how to unlock the reel and wind the line in first – which he managed – he’s fairly bright. Easy-peasy.

What he didn’t expect, while reeling in the line, was to nearly have the rod yanked out of his hands. Yup. The non-fishing photographer/cook caught himself a fish. Illegally, too, considering he didn’t have a fishing license.

He got around that one, though, by throwing it back – after yelling at one of his buddies to come back and take a picture first. I’m not sure how he convinced the guy to take the shot and not just throw the camera in the water; he was that mad that Muddy had caught a fish by accident when the rest of them couldn’t pull it off for trying…

I was rather impressed, though, and talked him into letting me have the picture… and posting it… and telling the story. Thankfully, he agreed to it all, ‘cuz I was tapped, story-wise.

I might actually have to go back to writing my own, if this keeps up.