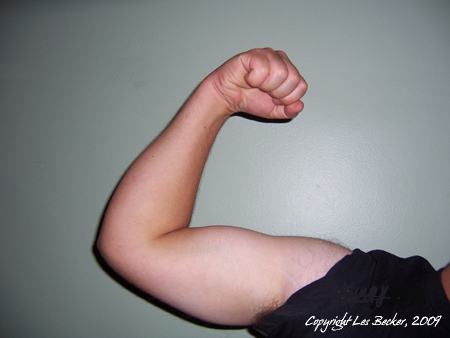 My father had a quirky sense of humour. More than anything, at least it seemed to me as a child, he liked to get one over on me. Especially if there were witnesses. And every time he conned me, I fell for it.

When I was oh, maybe 9 years old, I remember sitting in his attached garage watching him do something or other while visiting with somebody or other.

They were trying to get something off of something else. Or on to something else. These details are hazy to me all these years later, most likely because of the psychological damage done to me that afternoon.

I see the funny side of this.

Way back then, though… Actually, I can still feel my stomach shrivel up a little bit at this memory.

And then I laugh, because it really was funny.

Whatever my dad and… ummm… let’s call him “Dave”… were trying to do, it wasn’t working out the way they wanted it to… These two big strong men couldn’t get whatever-it-was on or off whatever-the-other-thing was, and my dad was getting pissed off. He was starting to cuss under his breath.

I waited, anticipating the ultimate in my father’s pissed-off-ed-ness to culminate in his utterance of the ultimate of swear words.

He rarely got that upset, but when he did, that’s the word he would invoke to make whatever he wanted to happen, well… happen.

He never raised his voice when he said it. He said it like he would tell the dog to sit. There was command in his voice, but he would say it as if he knew without a doubt that the command would be followed, and the command was generally followed immediately.

My dad never said it to people or animals. This Magic Word was reserved for uncooperative inanimate objects only: the car that wouldn’t start, the window that wouldn’t open, or the thingamajig that wouldn’t come off of the whozawhatsit.

Not that day, though.

Dave finally said, “Matt, ya gotta put some elbow grease into it.”

And my dad laughed and replied, “I’m all out of elbow grease, Dave – used it up on the lawnmower last weekend.”

And then he turned to me, dug into his pocket, and came up with a $2 bill…

“Hey, Diddly-Doo. Run on down to Western Tire and pick me up a can of elbow grease.”

And I fell for it.

Down I walked to the Western Tire, and marched up to the counter. I presented the money to the proprietor, and asked for a can of elbow grease for my dad.

I don’t know how that guy kept a straight face, but he did. He told me he was sorry, but he’d run out. He didn’t expect to have any back in for another week. Hoped he wasn’t inconveniencing my father too much.

None the wiser, I went back home and told my dad the Western Tire was all out of elbow grease. I couldn’t figure out why that was so funny. I didn’t care much, either, because my dad told me to go ahead and keep that $2 bill, to compensate me for my trip.

It wasn’t until we were all at the supper table that I discovered I’d been had. My dad told the story to my mom, laughing to beat the band. My Brother the Trespasser had to leave the table, he was laughing that hard.

Mom gave Dad holy hell for making me go downtown and embarrass myself. Up to that point, I hadn’t known enough to be embarrassed, but the more my Mom told him off, the more I wanted to crawl under the table. I think she might have been more embarrassed to have birthed such an idiot, than the idiot was to realize that you can’t buy elbow grease at the Western Tire store.

I don’t think I ever had the nerve to walk into the Western Tire ever again. It’s no longer there, now, but if it was, I still wouldn’t go in.

I’m sure the owner would laugh and ask me if I needed elbow grease.

How about going to the hospital supply department for a neck tourniquet? Have a great day.

Les Says: Oooookay…. (Did she just advise me to hang myself?!)

Wow, your dad was handy and worked in the garage with his buddy and he played tricks on you and your whole family sat down and ate meals together. What a trip.

Les Says: Well…. THEY ate meals together. I generally hid under the table.

No, No! Just sharing the experience!

Actually, I thought maybe a spam-bot had been sending me a sales-pitch. Sorry about that. I left it up ‘cuz I thought it was funny – guess I inherited that “quirky sense of humour”, after all.

Glad to know you’re human, Jan. Welcome to Where the Walls are Soft.

Aww, hell, Jan. I can’t believe I fell for that. Yes. I JUST now caught on to the joke.

ROTFL! My mother DID birth an idiot, didn’t she?

Your dad had a great sense of humor–how funny! You were a very good son. Enjoyed reading about your funny experience. Great that the store keeper went along with it too! LOL

Les Says: Actually, I was a mediocre daughter. I probably would have made a much better son…

Great story and really a quite harmless prank. I remember my first time camping with the scouts and they sent me out to the other campers to find a left-handed wind director for the fire. Needless to say, everyone had a really good laugh at that one when I finally came back. (I hated scouts and camping)

Hey Preston – that reminds me of the left handed screwdriver. And my husband always asks for left handed chopsticks.

Man that hurts. Because it is damn funny as a parent, but sorta humiliating as a kid. But we all know that past humiliation makes for damn good blog copy, don’t we?

Les Says: It does at that. Makes me wish I hadn’t burned all those diaries years ago. There would have been a gold mine of embarrassing moments.

Before I started my trade apprenticeship my Dad warned me about the tricks and what not so I was able to tell my bosses friend to go buy his own can of tartan striped paint (otherwise I’d have joined you under the table, Les lol).

That said, I have to say that all the little cons made me really suspicious of anything anybody said to me for awhile as a kid… I remember walking home from “Skate Night” one winter evening and being told by some kids up the block that my house was on fire. I loudly informed them that I wasn’t falling for it, no how, no way, and getting really, really upset that they would try to pull such a cruel joke…

… and walking around the bend in the road to see three fire trucks in the yard and flames shooting out the chimney.

Yeah. I have trust issues.

What does “You crept!” mean?

Les Says: I don’t know, but it’s a MAGIC word. Be careful with it.

It IS funny. But I’d never want to go back, either!

Les Says: Brrr! Me, neither!