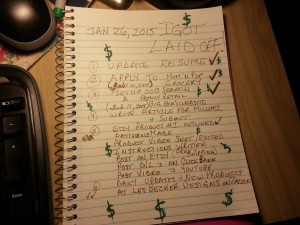 I suddenly find myself laid off, as I’m still paying down my now “smallish” debt, and beginning to hoard for my pre-paid life.

No income once my final check is paid to me in two days’ time. Trust me, that money is earmarked for survival!

Don’t know yet if I’m eligible for E.I. (“Employment Insurance” – government funds I’ve been paying into with every paycheck since I went back to work). Remember, I failed miserably at my “Early Retirement” and I may not have enough employed weeks logged to get on the program. I took NO E.I. during said “Retirement” – I’m hoping that works in my favour…

Meantime, my February 2015 Money Challenge to myself is to get a new job and begin earning at least what I lost before the end of the month.

I’ve updated the resume, and applied at a Mom ‘n Pop Grocery nearby. I could be doing anything – from working in the deli, stocking shelves, making pizza, cleaning, running a till…. I think it would be an interesting place to work.

I’ve also started a job search at a Family Retail Big Boxish type store. It has a bzillion departments (including electronics AND groceries!), so I could be doing anything there, too. So far, there are no job openings.

In the meantime, I’m also working on my Etzy store, building products for Les Becker Designs, taking two marketing courses, and working on several downloadable digital products (including one for this site).

My goal is to bring in $1250 in take-home pay during February 2015. And then again for March. And so forth. In the process, I’m already forced into the original February Money Challenge I was going to post prior to being laid off: Make February a “Dry Spending” month… meaning Absolutely NO unnecessary spending. Zero.

I’m winning that one so far. 😀

P.P.S. The drawback to all these challenges is that fiction writing seems to have been put on a back burner. This will not do. 🙁

Lifestyles of the Prepaid Living…

Finally Learn to Get (and KEEP) Control of Your Finances