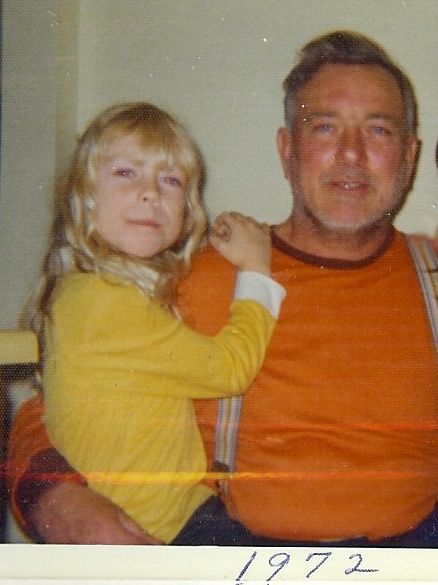 From the time I moved out on my own, right up until my parents moved into the first retirement home, I received a unique gift from them at the end of every summer: enough vacuum-sealed fillets of whitefish to last until the next delivery a year later. 22 annual deliveries, by my calculation. That’s a lotta fish.

My dad raised kids, and vegetable gardens, and sunflowers, and honeybees. Sometimes he raised the roof. He could raise hell, too, when he wanted to.

He wasn’t the kind of guy who said “I love you.” I used to wonder how he proposed to my mother, without saying those three little words, because I’d never heard him utter them, not to her, nor to any of us kids, nor to my daughter. When we said “I love you,” to him, he would reply, “Okay. Goodbye, then,” or, “Here, I’ll get Maude (my mother) on the phone.” He never said it, but we always knew, mind you.

He’s been in and out of hospital for several years, now. The first time that we all knew he was dying, and all the kids came home, I was sitting beside his bed with Un-Brother Ken. Dad was all talked out for the time being, and we sat there in silence for a long time, when he suddenly said, out of the blue, “I’m not afraid.”

I don’t know if he was talking to me, or my brother, or maybe it was himself. After a bit, Ken answered him, saying something to the effect of that being a good thing, then. I couldn’t say anything, myself. I was certain it was my last visit with him, but glad, nonetheless, that he was okay with… It. That day, when I left the hospital, I kissed my dad goodbye, and said, “I love you.”

“Okay – are you taking the bus home?” was how he replied. I think he meant “I love you,” though.

And he got better.

Several hospital incarcerations later, as my mother kissed him goodbye, she said “I love you.” I’d never heard her say that to him before, although she says it to me all the time. I remember thinking then that maybe my mom knew she would never get another chance to say it to him.

And he didn’t hear her – his hearing aids were in the bedside table. So, when she was halfway to the door, he called, “What was that…?” And my mom giggled a little, and called back a little louder, “I just said ‘I love you.'”

And so, from the doorway, laughing, my mother yelled at him.

And they both laughed. And then he said it back. Out loud. I heard him. And I knew I’d never see him alive again.

But he got better.

The next time he was dying in hospital, I kissed him goodbye, and said “I love you,” as usual.

And he squeezed my hand, kissed me back, and said, “I love you, too.” Out loud. I heard him. And I knew I’d never hear that again, but that was okay, because he’d actually said what I’d always known anyway, and I knew that he knew that he’d never see me again, and that’s why he said it, finally, just in case I was wondering, maybe…

But he got better.

We’ve had many more chances to talk since then, and we’ve made the most of it. I’ve gotten a lot of wonderful bloggable stories of his life, and those that haven’t been told here yet, will be in future, I promise that. My dad was a great storyteller.

We talked, too, of what it was like to be near the end. He was pleased with his life. He’d done almost everything he’d wanted to do (“…and some things I didn’t know I wanted to do, but I did them anyway,”), and he didn’t have any regrets that he could think of.

I’m comforted to know that near the end of things, my dad was able to look back on it all, and feel content that he’d had a full life. And that he wasn’t afraid. But I think it’s also important to remember that from his standpoint, “It sure went fast.” I imagine, if we all live to be 87, we’ll feel the same. So, if we want to do something, we’d better get at it. I would hate to look back and wish for things to be different.

The last time I saw him, in a different hospital, eating a piece of pie, with a non-cooperative, trembling hand, I realized he might never get any more pie. He wasn’t supposed to have this piece of pie, but there comes a time when restrictive diets just don’t matter anymore, do they?

The best meals for my dad always ended with a piece of pie, something he would complain about to my mother, if she didn’t provide it. He was known to say to company around the dinner table, “Gee, I’m awful glad you’ve come for supper. If you hadn’t, I wouldn’t have got any pie.”

And here he was, eating what might be the last piece of pie in his nearly 88 years, and his damned hand couldn’t catch it on the spoon. So I tried to help, as best I could, guiding his hand to scoop it up, and he said what I was certain would be his final words to me, knowing, I imagine, that we would never get the chance to speak again.

As last words go, they were good ones – if you knew my dad.

But he got better. Sort of. He said many more things to me, but right now, I can’t remember any of them.

He had a few more set backs, but he did get out of hospital, and he did get more pie. He never quite got back up to himself again, though.

And this morning, at 5:15, My Brother the Trespasser called to tell me he’d gone in his sleep. I imagine his last words would have been to my mother: “Goodnight, then…”

If I could have been there when Dad breathed his last, I like to think I’d have had the nerve to say, as my goodbye to him, “So long, and thanks for all the fish.” It would have been a way to let him know I appreciated everything he’d done for me over the years – which was a helluva lot. More than I deserved.

It would have made him laugh, too, even though he’d never seen the Hitchhiker movie, nor would he have read the book, or ever even heard of Douglas Adams. But he’d have remembered all that whitefish, and he would have laughed, I know. And to go out laughing would have been just his style.

Instead, he made me laugh, with “Quit tryin’ to steal my pie.”

I think, though, that what he meant was, “I love you.”