I drove down to Teeny-Tiny Town today, having had no sleep since… well, I’m not certain when, but I’ve been writing – really writing – for real writing, so No Sleep Disease isn’t exactly a bad thing. This time.

On the way down, I saw a small plane tipped over on the four-lane median strip, surrounded by a single fire truck and a couple of cop cars. I thought I might be hallucinating at first, but then remembered that if that was the case, my imagination would have turned it into an airliner. I ought maybe check the news to be certain (I assume a plane landing on the highway might be considered news around here, anyway), but I think it’s safe to say I actually saw what I think I saw.

When I got to Teeny-Tiny Town, though, and saw that photo of my mother in leathers on a motorcycle… well…. that was something I was pretty certain was all in my own mind.

Until she started to laugh, and told me the story…

Seems My Brother the Trespasser (or maybe it was a nephew – I’ve had no sleep, and my mom can’t remember…) bought himself a new ride this past spring, and went down to show it off to my mom and my sister, who were both suitably impressed. Mom was so impressed, in fact, that she told one of the aides in the Nursing Home that it was her hog.

I don’t know why, but the aide didn’t believe her!

Mom said she would prove it, and got the Trespasser/Nephew/Whoever to fit her up, put her on the bike to pose, and then had [somebody] get a couple of copies of this pic printed up. The aide displays her copy on her fridge at home. I stole the other copy, to show you all how cool my mom is…

Look real close now… she’s not pointing at you. She’s giving you the finger (yeah, yeah, she’s flipping the bird backwards – give the ol’ lady a break – she’s 85). 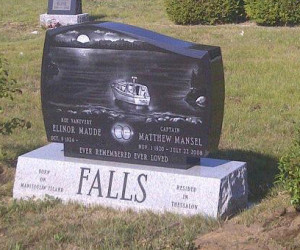 We had a visit to the graveyard (my dad’s monument is finally in place – his boat, sailing off into the sunset lasered into it somehow – he would have been right impressed, I think – and it’s an odd kind of comfort to see that boat on there, sailing away…), and went out for lunch before I sneaked off back home, pilfered photo safely tucked away.

On the way back, I saw an upside down tractor-trailer in the ditch, which my brain turned into a crash-landed Borg ship for a minute. The lack of armed militia tipped me back into the real world soon enough, but not before a whole ‘nother story clicked into place, waiting for me to start writing when the current project is put to bed.

Which is where I’ll be going… once I’ve pecked out a few more scenes.