Skip to the content
My big project for 2014 (aside from becoming “Independently Self-Sufficient”, that is) was to be able to feed the household without having to purchase any vegetable I could grow myself.

Actually, the garden was a major part of the “Independently Self-Sufficient” plan – I just knew damned well that I could only just begin the project this year. I could only plant the stuff, and hope that in a year or two, I had learned enough and grown the garden large enough that we wouldn’t need to purchase items like tomatoes, cucumbers, strawberries and blueberries, melons, peas… you know – the kind of stuff that people around here manage to grow in sufficient amounts in their backyards.

My main concern was that gardeners around here have a big one-up on me.

END_OF_DOCUMENT_TOKEN_TO_BE_REPLACED

Ugly Casserole is as simple as it gets. You can’t get much more simple than 3 ingredients: ground meat of any kind, a couple of potatoes, and a can of beans.

The ground meat can be anything – what you see here is a combination of ground chicken and ground Ummm. Something – I just can’t remember. Might be turkey.

Preheat your oven to around 350 degrees F.

Meanwhile… mix your ground meat up with whatever spices and/or fillers you generally add. I add onion and garlic powders, pepper and a little hot sauce.

Mix all this around until you think it’s as evenly mixed as it’ll get. Or until you get sick of mixing it. Stick it in the fridge to ponder its last few minutes of rawdom.

Scrub a few potatoes really well and slice them up evenly, unpeeled. I like this handy-dandy little whatchamacallit for its speed and the evenly sliced results.

It can be a dangerous beast though if you don’t use a guard. I seem to have misplaced the guard to my slicer, so I have to watch for knuckle shavings in the potatoes. 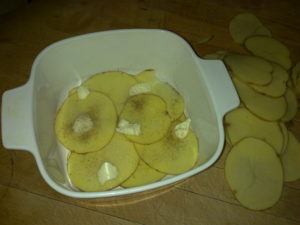 Layer the potato slices in the bottom of a glass casserole dish. I use glass to thwart “stickage” later.

Make 2 or 3 layers, dabbing bits of butter or margarine between layers, along with a little salt and pepper. If you have an onion, chop it up and layer that in there, too.

Now, take your ball of shmushed-up meat mixture and plonk it right on top of the potato layers.

I KNOW!! It’s gross! Plonk it on there, anyway. Now smush it down good and flat and even.

Then, take a fork and poke a bunch of holes into the surface.

Now when you dump your can of beans over the ground meat, the juice will seep down into the forkholes. I don’t know if “forkholes” is a real word, or not, but I like it, anyway.

Now, see, this doesn’t look ugly, yet. Wait for it.

Put a lid on the casserole dish and stick your victim in the preheated oven.

Keep your fingers crossed for about 45 minutes that someone in the house will yell, “What the hell is that smell?” before the whole thing boils over and sizzles itself all over your oven floor.

Smart money would have you set a timer and check the thing before it explodes sideways. Me now, I’ve never been too smart with money, so I generally have a mess when I make this.

About half-way through your cooking time – I don’t know… 25 minutes maybe? – you need to check for “done-ness” by poking a longer fork down to the bottom of the dish, and through the potatoes. If the potatoes fight back, you still have a ways to go…

At this point, though, you should swivel your casserole lid so some air escapes. This would be to help prevent that oven blow-out that I get. Every time.

You’ll know it’s done when you can scoop it out of its cooking dish and it doesn’t resemble bloody brains. Brains are fine, but bloody brains require further cooking time.

It’s done! Enjoy – assuming, that is, that you get the nerve up to put any in your mouth…

Yes, it’s ugly. But it really is good. 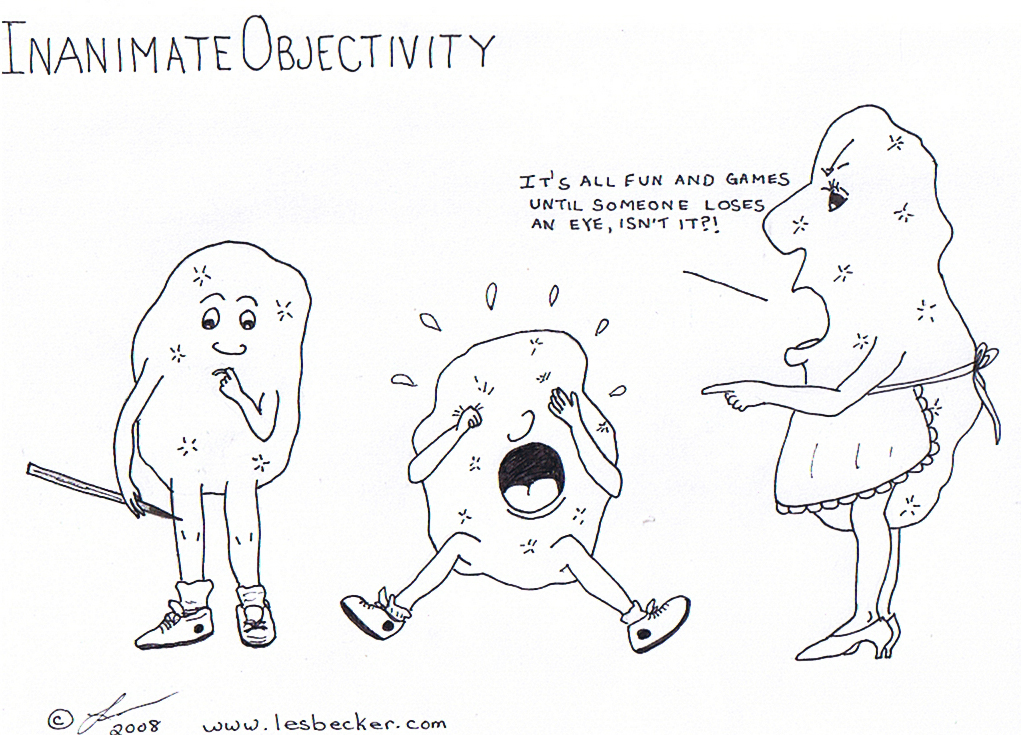 For Sale at Les Becker Designs!

Yeah, so my dad bought an iPod. My Brother the Trespasser picked it up for him, set it up and showed him how to use it.

Dad spent about three hours playing with it and yelling at us what a “great rig” it was. The volume was so high that I could hear the lyrics from across the room. Every now and again he’d ask if it was his or my brother’s, and did I think he ought to get one for himself? Give him a break – he’s 87.

He may have his days where he can’t remember what happened five minutes ago, but he has no problem with what happened 65 years ago. He told me the “Cabbage Story” again, at my request.

That was a big ship we went Overseas on. Everybody had a job they had to do, and I ended up doing prep work in the galley. You never saw such a big space, either. There’d be fifty soldiers working down there at once, getting the meals ready.

Mother: I guess so.

Dad: You’re darn right, I do! I hated having to peel those things. We’d be down there for hours at a time, hunched over, peeling vegetables – it got pretty boring. Now and again we’d get up to shenanigans, like the time that big Mulatto fella almost stabbed me to death… closest I came to getting killed during the whole war.

Mother: Well, what about when you spent all those months in the hospital with Diphtheria?! That nearly killed you!

Dad: Well, there’s a big difference between dying of Diphtheria and getting stabbed to death by a big Mulatto fella, now, isn’t there?!

Mother: I guess so…

Dad: You’re darn right there is!

Me: So how’d you nearly get stabbed to death by a big Mulatto fella?

Dad: I hit him in the head with a cabbage.

(at this point the conversation pauses… as it does every time he tells me this story, because neither of us can stop laughing for a bit…)

We were bored, see? And we got up to a game of catch. We were supposed to be peeling cabbages in our group, and the outer leaves come off just as easy when you toss a cabbage twenty feet across the room to the guy on the other side. I suppose we could have peeled them faster if we hadn’t been fooling around, but it wouldn’t have been as much fun, I guess.

Anyway, I was tossing cabbages back and forth with this other guy, and the cabbage we were using for a ball was pretty much peeled, when this big Mulatto fella come walking in between us, just as I heaved my cabbage across the room. Smacked him right upside the head with it.

Cabbages are hard, too, when all the fluffy stuff is peeled off. He was a big fella, though, and even though it smacked him pretty good, it didn’t knock him over. He turned and looked at me and I knew I was gonna pay for throwing that cabbage.

Then he snatched up a knife and started walking toward me, and I knew I was a dead man.

Mother: You’ll notice he’s not walking around dead about now…

Me: Yeah, Dad – how’d you get outta getting stabbed to death?

Dad: I don’t know. He just stopped about half-way and put the knife down. He didn’t even say anything, just walked away. Maybe he thought better of it, or figured I wasn’t worth a court-martial. Anyway, he didn’t stab me to death, so that’s good.

Dad: I went to my bunk and changed my pants.

Random Song for the Day: “Friend is a Four-Letter Word” – Cake