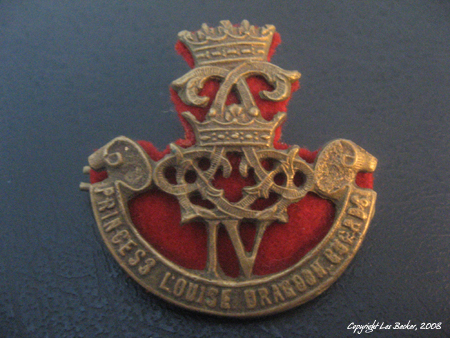 This unit was converted to armour and redesignated 4th Reconnaissance Battalion (4th Princess Louise Dragoon Guards) on 11 February 1941. The battalion was formed from personnel from 1st Canadian Infantry Division in the United Kingdom together with reinforcements from Canada in July 1941. On 08 June 1942, it was redesignated as 4th Reconnaissance Regiment (4th Princess Louise Dragoon Guards).

My dad was stationed in Belgium for his first gig during World War II. It was there that he contracted diphtheria and ended up on a wild back-and-forth middle-of-several-nights not-what-we-might-call-an-ambulance ride with two hot Australian chicks between Ostend and Amsterdam and a hospital ship that would (eventually) sneak him successfully to hospital for months of recovery.

He teased those nurses the whole time he was under their care – it’s a wonder they didn’t just dump him out on a back road somewhere. “Whad’ya wanna live in Australia for?! All ya got there is SHEEP!!” I wish I’d recorded his imitation of the insulted nurses when they retorted, “We’ve got cities and towns! Just like you’ve got!” My dad sure knows how to piss a woman off…

Prior to his grand contagious escape, my dad’s job was to “guard” an outdoor sports arena. He wasn’t guarding it from the Germans – they were being kept out of Belgium fairly handily by 1943-44 – but from the locals. This arena was where they would come once a day, lined up and dressed in their very best clothes, carrying any container from their pantry they could carry, to pick up food passed out by Canadian Army personnel off a truck. He said it was a strange sight – all these folks dressed up in their finery, waiting for a meal with cooking pots in their hands – even the kids. It was a little kid that made him realize that he didn’t have a clue what he was doing there….

Dad’s job during the daylight hours was to keep the people cordoned off while other personnel were unpacking the trucks and setting up tables and food, etc. Officers ate first, followed by infantrymen, and then the townfolk got their share. Sometimes, understandably so, I think, this made them a little impatient. It was up to my dad to be tough, cruel and frightening, and order them back beyond the barrier to wait their turns. My dad was 23. Ha.

He said, most times, all he had to do was wave his gun menacingly and growl and they would settle down. He growled because he couldn’t speak the language. He waved his gun because he didn’t know what else to do with it.

His gun was a bit of a joke, anyway, he said. It was a “sten gun”, jumbled together from metal pipes and “you wouldn’t recognize the thing as a gun at all, unless you knew what it was.” It worked, though; it was actually a formidable weapon, firing automatic 303 cartridges. My dad pronounces “303” as “3-aught-3”. He’s Canadian, you know.

Sometimes, at night, he would be assigned to guard a certain path into the sports arena – one designated for soldiers only, and he was to turn back all non-military personnel with no exceptions. Sometimes, locals would try to get by him with fake ID cards, crudely put together that had no hope in hell of passing for anything official. This part of the job was boring, and sometimes for a lark, my dad would pretend to be greener than he was, and be “fooled” by the most ridiculous-looking, fakest-looking card that was passed to him, and let the guy holding it through. He said that usually the guy would have a hard time keeping the surprised look off his face and continue down the path.

When I asked why he could get away with letting these people through, he said, “They weren’t spies – they were looking to shorten the food line for themselves, that’s all.”

One day, while standing behind the cordon between the food and the people, my dad started having trouble with one little girl and her family. He would shoo them back, and turn to keep an eye on everybody else, and when he looked back again, there they would be, sneaking under the cordon, that little girl, especially. Finally, he’d had enough.

He watched from the corner of his eye as the little girl snuck further and further, and then suddenly ran at her, yelling at the top of his lungs. Had he done this to one of his own kids in later years, it would have put the fear of the devil himself into whichever one of us he was yelling at, but this kid stood there and stared him down. He didn’t know if she was paralyzed with fear, or standing defiant, but he kept yelling as he slung his sten gun over his shoulder and bent down and hooked her up under the armpits with his other arm, stomped to the cordon and dumped her over it. There.

He didn’t have his back fully turned before the little brat was back under the rope. He picked her up again and put her back behind it. And she started yelling at him!

He drove her back again. This was not turning out to be a good day.

He finally had to resort to standing directly in front of the girl to keep her on her side of the cordon. The kid kept yelling at him. Then she started pointing and yelling. It took Dad a while to figure it out, but he finally realized what she was pointing at.

Back behind him, at the spot that he’d pulled the little girl off her feet, were two little wooden shoes, embedded in the mud. He’d yanked her right out of her shoes.

Now, my dad loves kids, and even at 23, he had a soft spot for them. He felt really bad. He finally waved her under the cord to rescue her shoes, but he kept a snarly look and growl handy, so as to save face.

At the end of the war, my dad went back to Belgium, and into a little shop. He bought a pair of small wooden shoes. When I was growing up, he kept them locked in a file cabinet in his den. Every now and then when I was very small, he would bring them out to show me – he even let me put them on and walk around in them once in a great while. They hurt.

He never told me the story about why he bought those shoes until just this year. He doesn’t know where the shoes are now – possibly packed away in a box in My Brother the Trespasser’s barn or basement. I wish he still had them so I could have posted a photo.

Another odd thing…. I’m not sure if Dad is remembering “Mein kluben” correctly, or if it was a slang term. I can’t find it anywhere in Dutch or German pertaining to “shoes” or “clogs” or “wooden shoes”, but that’s what he swears the little girl was yelling. Anybody out there have an inkling…? I’d love to know.

P.S. Y’all can uncross your cramped little fingers and toes, now. Thank you sincerely. I start the new J.O.B. some time next week. 😀