…the final segment of a story written for my high school newspaper in 1983. By rights, I should wait to post this ’til Christmas, considering the theme, but I’m sure y’all would rather see a photo of me at Christmas with a wreath, or a herd of reindeer on my head. 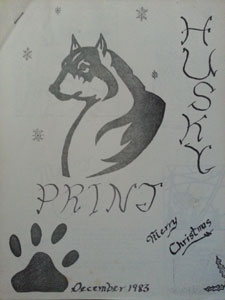 It was Christmas Eve.

The nurses hung the long banner high up on the wall. It read “Merry Christmas”. The year was 1983.

END_OF_DOCUMENT_TOKEN_TO_BE_REPLACED

This is how I, too, would have liked to be spending today, were it at all possible…

No word of a lie – I keep expecting to see Trick-or-Treaters outside. It’s F-ing cold.

I can deal quite gracefully with warm weather in January, but when you start messing with a Northerner’s perception of “summer”, well… now you know why Canadians drink.

If Patchouli sees a camera, she will pose for as long as you will sit there and take shots.

Every now and again, I’ll get a really nice one like this – sometimes I can catch her in a “candid” moment, but those are rare – Patchouli really is a Prima Donna when it comes to photos.

… the continuation of a short story in three parts, originally published in my high school newspaper, The Husky Print, in 1983.

In case you missed it… To Live Forever: Part One 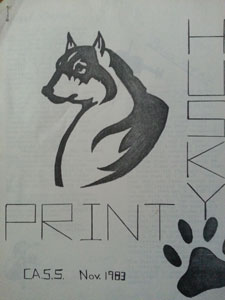 For the first time in his twenty-one years, death had touched Cecil Walters’ life. He didn’t know how to take it; he was frightened, but he didn’t know why. Everyone who knew him noticed the change. He didn’t wave on the street and he didn’t smile. All Cecil could do was think about Gerry and the way he had died.

END_OF_DOCUMENT_TOKEN_TO_BE_REPLACED

This is a “pulled” or “drop-stitch” scarf. It’s knit on 4 needles and then, when binding off, every second stich is just dropped off the needle. Yank on it really hard, and it “pulls” down into a nice fluffy scarf.

I made this at Ruby’s while were watching the Blue Jays play. Well… Ruby watches the Jays play – I knit things, and listen to her yell at the television.

It was Ruby who showed me how to make this scarf.

The other day Ruby got laughing over a friend of hers. Trudy lived across the street from Ruby for years, and they were great friends. Now, they generally just talk on the phone, as Trudy lives way on the other side of town.

Ruby: …and you know when Trudy gets on the phone, she talks for hours!

END_OF_DOCUMENT_TOKEN_TO_BE_REPLACED

It’s Day 2 of my Holidays. No, I don’t miss work. I do kind of miss the spider, though. I met him/her on my lunch break a while back and he/she was good company.

I have great big plans for the next few days and so far, I haven’t done any of it other than get the rest of To Live Forever scheduled to post (that’s on Sundays, Cardiogirl. I’m making you wait.).

I had to do my own laundry yesterday. I’m no longer accustomed to such menial work – I have a Washer-Woman, you know.

END_OF_DOCUMENT_TOKEN_TO_BE_REPLACED

This is a close-up shot of one of my attic wall panels. It’s not finished quite yet, but every time I look at it, it makes me smile.

It’s the perfect pic for this post as Louie Da Boss made me very happy this week by “forcing” me to take 4 paid days off. In a row. After that, I get my 2 regular days off. I haven’t taken a paid vacation week since… Geez, I think it might have been 1992, when I was a Beer-Slinger.

So… here I sit at 7 AM with a cup of coffee in hand. The bed is made. The catboxes are clean.

I have pants on!

Me, I’m gonna post fiction; a short story in three parts, originally published in my high school newspaper in 1983.

My Journalism class that year, was tapped to publish the school newspaper (The Husky Print) for the first quarter.

My teacher, whose name shamefully escapes me at the moment, told me I was to write a story. She was a big supporter of my dream to become a published author of fiction some day in the distant future.

My first deadline! I had no idea what to write.

I went home and told my mother, also a staunch supporter of my dream, the news, and asked for a suggestion.

“Write about a man who wants to live forever,” she said.

The Editor-in-Chief decided that the story was too long for a single issue, and suggested cutting it into three parts.

“What do I do for the rest of the term?” I asked the teacher.

She told me to bring a book to class until exam week. I very much enjoyed that semester, as I recall.