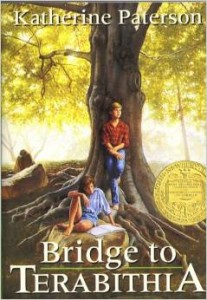 Kyla came home from school yesterday with her book order: her very own copy of A Bridge to Terabithia. She’s read school copies several times already, and seen the movie in the theater three times now. She rushed in at 3:30, dropped the book in my hands, and rushed back out to her babysitting job.

I’d only seen the movie once, and never read the book at all. So, of course, I changed all my Friday night plans immediately (homework, video rendering, writing and new computers being set up are not really Friday night occupations anyway…), and drew a bath. And I did something I believe I haven’t done since 2002: I read an entire book in the bathtub in one sitting. Errr… soaking.

And, yes, the book was much better than the movie, as has always been my experience, although I really loved this movie (note to self: find a copy of the first movie version for comparison sometime). The book has only 128 pages, so it isn’t that long of a read. I was just contemplating refilling the tub with hotter water for a second run-through, when the phone rang.

It was Louie, my Dream Job bossish/partnerish-type person with assignments and schedules and bath-time advice: namely that one does not bathe in the late afternoon/early evening. Apparently, that is an early morning activity only. And should be done standing up, under a shower-head. Luckily, Louie is only a bossish person now, with no real power, so when I hung up the phone, I refilled the tub and read the book again, remembering the “Real” King of Terabithia with growing clarity…

“At first they avoided each other during school hours, but by October they grew careless about their friendship. Gary Fulcher, like Brenda, took great pleasure in teasing Jess about his ‘girl friend’.”

One of the worst insults to a young man of a certain age is to refer to his best friend as his girlfriend. It’s an even worse insult if the girl is your cousin, which may give said young man a quick retort to fall back on (“She’s not my girlfriend!! She’s my cousin!!“), but not the sort of satisfaction he would get from, say, pounding the crap out of whomever lobbed the insult. On Main Street. At the top of his lungs. In front of the entire third grade.

Of course, the presence of the entire third grade preempts any attempt at crap-pounding, simply because there’s no way of knowing if someone is going to “back’em up”. Pounding the crap out of one guy is possible, but two to four? Better to be embarrassed than to be bloody and embarrassed.

Mike at nine years old, though, can’t just leave things be. If he can’t pound crap, he will do the absolute worst thing he can think of. He will give them The Sign.

The Sign has no religious or satanic connotations to us. Sinful connotations, certainly, but we’re not concerned so much with burning in hell as we are with being strapped and/or grounded if a teacher and/or parent should see The Sign being performed, even if the other kid does deserve it (which he does, the nasty little bastard). Worse, my mother is a teacher, which makes utilizing The Sign, even in extreme circumstances, that much more dangerous. On Main Street. In broad daylight.

Use of The Sign is, in fact, so heinous, that it makes the target absolutely boil over with rage, so Mike has learned to be careful – hurling other, less volatile epithets over his shoulder while gradually inching further up the sidewalk, further from the crowd, looking for all the world as if he’s creeping away shamefully, his pride in tatters. When he judges the distance from the crowd compared to the distance to safety (my house, smack at the end of Main Street) to be favourable, he suddenly whirls like a dervish, whipping his fingers into The Sign violently with both hands. My God, he is brave.

Which is a lucky thing, because The Sign evokes a preternatural vehemence in 9 year old boys. Lucky for Mike, I can run as well, because it is my job to beat them both to the driveway and call the dog, who will bark ferociously, viciously whenever I say “Sic’em!”, but will simply raise her eyebrows whenever Mike says it. And once the thugs are driven back, Mike and I will retreat to our own version of Terabithia, which, in 20-odd years will be buried under 60 short tons of fill and covered with 3 to 5 houses worth of lawn (not to mention 3 to 5 houses).

Knowing it’s gone makes the memories more bitter than sweet. Life’s like that.

I imagine Mike must be terribly disappointed now, that in the 21st century, The Sign is bandied about openly by drug-addled metal heads and 9 year old boys alike, a token signal used as some sort of not-so-secret handshake, stripped of its terrible symbolism. Of course he’s disappointed. It was bigger than The F-Word, after all.

Incidentally, when searching for “devil’s horn hand signal” pics, I came across this whack-job interesting site…

Random Song for the Day: “Walk Like An Egyptian” – The Bangles

His name is Mike Valley. His favourite song is a toss-up between “Beth” by Kiss, and “My Ding-a-Ling”, by Chuck Berry. “The Lion Sleeps Tonight” runs a close second. He sang Karaoke before it was invented. He owns a rock polisher and eats Caramel Spread® sandwiches, and he’s the best sword-fighter in the world. 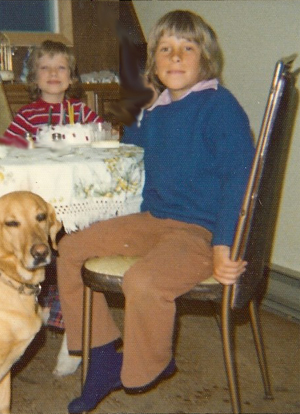 34 years later, I have the exact same haircut…

About 10 minutes after this picture was taken, Mike swallowed the quarter hidden in his piece of cake, and spent the rest of the day pissed off about it. I had to Photoshop me over from the other side of the table (along with the window – you know, for the view), and poor Girl with the Plaid Pants got “smeared” out because I just didn’t want to share the limelight. Happy Almost Birthday to me.

This post is for you, Mushy. Something to laugh about while you recuperate… did your mom put money in your birthday cakes? I wanna know…!

Not-So-Random Song for the Day: “My Ding-a-Ling” – Chuck Berry

Ky and I went to see the movie tonight. I don’t know why I never read that book – until Kyla mentioned a school assignment about it (she’s already read it twice), I had never even heard of it. I’m so ashamed of myself.

The movie was wonderful. I have never been quite that enthralled, I don’t think; it was just so perfectly “me and Mike Valley” (Well, except for that really nasty bit, but something nearly as bad did happen in 1975, and I don’t think I’m over it even yet). If I had read Bridge to Terabithia when it came out in ’77, I would be a very different person today, I’m sure.

Mike, are you out there somewhere? Did you see the movie?

Did you think of me?