…or rather, It’s ordered me to take care of some things I’ve been avoiding; loose ends that need to be tied up, legal issues, school concerns, employment and living accommodations.

I hate the Real World. It’s no longer a friendly place for me to be, and I find much more comfort in the acquaintances I’ve met online from other cities and countries – people I may never meet face-to-face. How weird is that?

I’ve set up a few automatic posts; some cartoons (not great renditions – just the original drawings so I’ll apologize ahead of time for the “fuzziness”) on Fridays, and Part IV of “The Waitress” will come up this coming Sunday. I have no idea when I’ll be able to finish the conclusion. I’m sorry for that; I’d like to know how it ends, myself.

Not sure when I’ll be back – I WILL be back, though. Where else would I go?

The Waitress, the Whiskey & the Handcuffs
Part 1 of The Ruby Chronicles

Ruby Daniel is a 30-something widow trying to get by in a small backwoods Northern town in the 1950’s. Her chicken farm is failing, and she takes a weekend job as a barmaid at an illegal drinking establishment run by a crooked police officer, hoping the extra income will allow her to keep her farm and raise her kids. 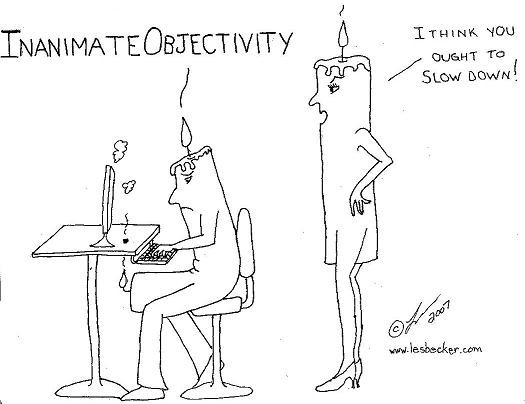 …strikes me funny that is. Another little collection from “The Landlady”.

“She still hasn’t forgiven me for that time I hit her over the head with a shovel.”

“I was black and blue from all the pokin’ around.”
(About a nurse drawing blood…)

“I had the stupidest dream. It was Christmas, and all these dead people showed up. You should’ve SEEN all the presents!”

“I was just beside myself. I should’ve got a lot more done.”

…and after she realized why I was laughing so hard…

“Don’t you write that down! I didn’t mean to say that.”

I’m enjoying school again – when I’m there. I’ve been having trouble getting there, but I’m happy to report that I AM working fairly steadily at home.

The course I’m currently working on is Flash Basics which, truthfully, hasn’t really taught me anything I didn’t already know; I’ve been working with Flash for a few years now. This makes for rather simplistic assignments – they’re still really time-consuming, though. What feels like 15 minutes turns into 4 hours later, most days.

But, I’m having fun, which makes all the difference. I’m almost through this course, and then will try to speed through the rest of my business courses before going on with the next Flash set. After that it’s pretty much just Dreamweaver – two of them, I think, and then Holy Ol’ Joe! I’ll be done!

I got a really good mark on the most fun Flash assignment so far – 99%. Wanna see it?

Apparently, there is another writer in the family. [[ DAMN! She killed her blog; can’t show her off anymore. 🙁 ]] – spell checked and the whole nine yards…

Ruby has gotten used to me writing down everything she says, now. She even seems to be looking forward to reading all the stuff I’m making up about her, if I ever get it printed and bring it over. I hope she still feels that way once she reads it.

Contrary to what I told Mushy in a recent email, Ruby just turned 82 a few weeks ago (I had added a year on – and she wasn’t altogether too impressed with me when I told her that, either). Her stories have made a big difference in getting me writing again. My own mother will be 83 in October, and I’m working on getting stuff out of her, too.

I’m able to visit Ruby more often than my mom, though. Ruby’s just up the street, and full of stories as she is, sometimes it’s the one-liners that she comes out with that make my whole day. I’ve gathered up a few to share. I don’t know if they’ll turn into “Landlady Stories” or not, or if you’ll find them as comical, but they sure struck me funny, as Ruby herself would say.

“He wasn’t really a dwarf.”

“I can crawl around out there and stick ’em in the ground, I guess.”

… so far, anyway, but I’ll be the first to admit that any “plan” I ever made in my entire life just turned around and bit me in the ass.

I’ve begun writing again, as My Landlady Story can attest, and I was pleased to discover that not only CAN I still write (which I had honestly begun to despair of), but that the story excites me, which is how it ended up into a To Be Continued state of being. There is very little of Ruby’s original yarn left in it. Part II is now complete (with another To Be Continued thrown in, yes, just to piss you all off), and is set to publish on Sunday, June 10th at 7 AM (because everybody ought to be out of bed and on the internet reading my blog on any given Sunday at 7 AM).

I must admit, that I’ve been a little disappointed with the reaction to Part I… being that the reaction has, for the most part, been, well, not much of anything. Even the lurkers that I have retained haven’t bothered to actually read the thing, according to my stats. This place has got pretty lonely of late, but I’m almost getting used to that.

Enough whining. It’s my blog, and it’s a comfort to me to post here, so I will continue regardless. There are five parts to The Waitress, the Whiskey, and the Handcuffs and I will string them along in weekly intervals, only because I also have three new cartoon panels to publish, and would like to mix it up a little. I should also admit that I have to actually draw the cartoon panels, and then upload them before they can be published, and this is probably where that will all fall apart, but then again, that seems to be my life in a nutshell, and like I say, I’m getting used to it.

On the school front, things are beginning to smooth out, when I can actually get there, but that’s another story. I never was much for “showing up” where school was concerned, as my mother would be the first to tell you if asked, and I guess that’s one bad habit that I may never break. Along with smoking, which I am back doing, to the point that I can’t afford beer, which really sucks.

But, I’m beginning to enjoy my own company again, now that I’m writing, and I even have a little idea that “The Waitress” may just make a decent screenplay eventually, which would maybe not be such a smart move. I’ll have to think that one over a little longer.

So, to those interested (and those that aren’t, but for some reason continue to click over here), those are the plans, posted for the sake of posting, which is always a stupid reason to post, but there you have it.